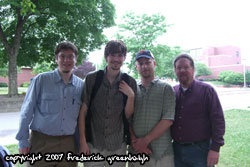 So after days of scouring town for knick-knacks, whatzits, bagged rice, sponges, kitty litter and countless other props, assembling all of the scattered noisemakers, poring over the scripts countless times and at least two twelve hour days of tireless cue-to-cues and rehearsals, the sound effects team was ready.? The voice actors, by the sounds of it, were on top of things themselves.? And by golly, the band just made things look easy.? With about every possible technical issue happening and being resolved, about 6:30 Friday night we had a precious breath of fresh air and an hour before showtime.

The funny thing with all of this, is that after all the work — days building the set, the hours the writers spent on their scripts, and everyone else did preparing to realize those scripts, the marketing, the mixing, the satellite uplinks, the rehearsal time… it all went into two and half solid hours with no retakes.? Talk about game-time!

The audience was in for a terrible treat, whether packed into the West Plains Civic Center or tuning in from any part of the globe, what with two 30ish minute full plays, a 5 min drama (featuring alien turkeys), two improv sketches, a mind-bending experimental music piece and a variety of short narratives… all in 6.1 surround sound!

When it was all through, hardly having realized that the whole thing was over, we tore the set down in many 2 hours flat.? The incredible, sound-resistant, microphone-laden, sound prop ridden stage was again a blank set of wooden floors on concrete.? The flurry of commotion faded, whirlwinding towards the community “Yellow House” where the off-the-wall cast party was already in full force.

With plenty of food and beverage to sate the army of triumphant radio dramatists, and rock-the-roof-off music provided by the Native Radio Theater contingent, ferocious chatter, ebullience and joy extended long into the late hours, with me finally turning in when Dave Taylor yelled out “Can someone cut the chirping bird track!” as dawn approached.

And then, with murmured goodbyes to the last stragglers and a feeling of dread of the coming morning, it all faded away.? Three hours later, astonishingly less groggy than anticipated, I piled my equipment back into my bags (baffled at how many extra CDs seemed to have shown up) and staggered out to where the shuttle was idling, more goodbyes were being said, and we all looked ahead to another traumatizing day of travel.

So, eleven hours later, Maine never looked sweeter, and eleven more hours after that, it’s with warmth I think about the welcoming and passionate group at the NATF, and the truly awesome time we all had doing what we love, talking about what we love, and being with people who love it as much as we all do.? While I can’t attest to the dynamism of West Plains cuisine, it was an amazingly welcoming community and a true home away from home.

And that’s a wrap!? Until next year, at least, when I already get the feeling that the long road to Missouri will be calling back to me again.