It’s not as glitzy as VR, as right for you as left shark, or currently trending on Twitter, but for those of us closely following audio the resurgence of interest in our art form at South by Southwest: the 2015 edition was incredibly encouraging.

Let’s call it the post-Serial world; numerous of podcasts came before and will come again, but Serial was the podcast that really captivated the minds of the pop-culturati and demonstrated that great audio is worth seeking out. Cuz, you know, the pictures are better.

With two distinct audio drama panels (Audio Drama in the 21st Century feat: Kc Wayland and Movies in My Head joined by our own Fred Greenhalgh, Matthew Boudreau, Sonia James and Patience Wieland), many more panels on sound design, 3d sound, the future of audio programming, it seemed like maybe audio is getting its time in the sun.  Or in your ears. 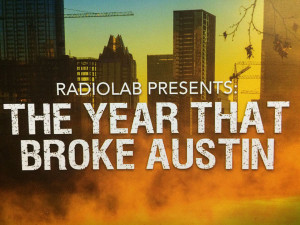 With no irony I say that the best ‘augmented reality’ experience at #SXSW2015 was the GPS-driven audio story, “The Year that Broke Austin,” an immersive audio experience driven by the Detour App with audio by Radiolab.

It’s hard to explain how brilliant and yet how simple this idea is. The Detour app geo-locates you, and then the ghost of a 19th century school teacher whizzes you back into Austin in the 1885, when the streets were dark, and a serial killer was on the loose. You stick your phone in your pocket and are lead on a scavenger hunt of sorts, digging up clues, exploring old alleyways, underpasses, and archives, trying to understand what happened 130 years ago.

It’s at times spooky, deeply educational, and incredibly immersive. You get to experience the City of Austin in an alternate-reality that only you through the input of the earbuds are part of. Your are simultaneously within the real world, and in the story world, and your mind struggles to reconcile the two throughout your audio journey.

Radiolab needs a huge amount of credit (as does Detour for hiring them) because it’s also possible to make audio that totally sucks.  The Detour experience is anything but.  Senior Radiolab producer Lynn Levy has a tightly crafted, engaging script that lures you deeper and deeper in the story, all whilst keeping you from running into traffic, getting lost, or falling into the Colorado River.  The geo-location piece works auto-magically, and as you are navigating the city you can move at your own pace, feasting on delicious music beds by Alex Overington.  The audio is lush and rich as the culture of Austin itself: seductive, dark, and smoky.

Projects like Detour proudly posit audio as its own “Thing” not part of a “thing” – in other words, audio alone is an experience worth celebrating, not just “film minus a camera.”  Audio bypasses the visual sensory circuitry and affects the human consciousness on its hard-wired survival plane. Sound is the essence of why the roar of the T-Rex in Jurassic Park shakes us down to our own lizard self.

In comparison, I slapped on a set of virtual reality goggles and it feels like a party trick.  The sound in all the demos I experienced were essentially bare of sound.  It was kind of cool that they could set me flying in the sky or in the middle of a wild basketball game.  But if I want those experiences, I can go out there with my real eyes and get way-better-than-HD visuals.  The eye is utterly unforgiving of images that are less than real.  In audio, you merely set up the trick, play with the shadows, and the mind does the rest.

I was able to attend a few television panels and there was widespread talk of the “golden age of serial TV” – which as someone who is interested in the golden age of serialized audio drama… That seems like the mediums are prime for convergence.  I asked as much, in one of the panels, and there were a lot of head nods.  It does seem a natural leap: If we are having a resurgence in long-form TV, why not having similar content that is audio only?

The only satisfying answer I got, is that the TV people are just so busy making TV that they haven’t had time to focus on audio drama.  Which is fine with me – there are plenty of us who are hungry to make it, who love the art form and are just beginning to fully explore its possibilities.

We’re not a talking robot and we don’t traverse time and space, but we can make those things appear with the flick of a sound effect and rattle you to your core human nerves.  And that is something.