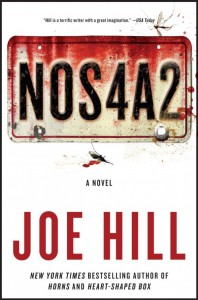 A young girl that can find lost things by travelling over an old rickety bridge. Parents who are doing the ‘best they can’ but terribly failing. A girl who becomes a woman and is so transformed by a terrifying event that she is a mess, with a son of her own, years later. Trying not to screw things up herself. Vic’s life is tenuous enough, until you bring back in the vampire who feeds on the life essence of young children and travels with them in his 1938 Rolls Royce to a twisted fantasy world called “Christmasland.”

Enter the world of Joe Hill’s NOS4A2, which goes many places you don’t expect and shies not away from a single disturbing thing you can imagine. The epic-sized horror tale twists and bends the expectations of genre so much that they creak as badly as the rungs of the “Shorter Way” bridge itself.

As a Mainer, raised on the fiction of Stephen King as a solace to isolated rural living, I have a special affinity for Joe Hill’s writing. In my mind, Joe Hill takes the crown for writing dark tales with soul. He is a grownup who has not forgotten what it was to be childlike – whether it was the kids daring each other to ride bikes down the quarry in “Horns” (did you get triple-dog dared to do that too?) or those stumbling across a slumbering sea beast in his taut short story “By the Silver Water of Lake Champlain.” Hill’s deft shapeshifting into the mind of a child is key to what makes NOS4A2 such a gripping horror novel. These are real, breathing, flawed human beings caught up in extraordinary things here, not cardboard cut-outs chasing vampires with wooden stakes.

Ah, but it’s not really the gifted Joe Hill whose praises I want to sing here, but of the special pleasure of hearing his work married with the lungs of Kate Mulgrew. Having not owned a TV in twelve years, I had no idea of Kate’s storied TV and film career, but as far as audio goes, damn, she nails it. This is what audiobooks are all about, folks: Charlie Manx, the vampire, croons out his temptation to children in a rasping, leather-bound piece of poisoned candy. Bing Partridge is a confused, well-meaning dolt who is ever-so-earnest in his dreams to get to Christmasland. And Vic, oh do we get into the mind of Vic McQueen, a tortured woman who wants to be a good mother but never can seem to get out of the way of herself. When she cries out to Charlie to hand over what she wants him to hand over, well, your earbuds are going to shake by the power of her frail voice.

NOS4A2 is full of pyrotechnics, travel to other worlds, true horrors of human depravity and a fair list of characters you grow to care about (many of whom get offed along the way). Many audiobook readers could have delivered this competently, but with Mulgrew, it shines. When it comes, Hill’s action is intense and ferocious, but there are lots of side-lanes and backwards excursions that work to set the mood and tone. Mulgrew, knowing that every moment is good for the gumbo, savors it all along the way.

In the book’s afterword, Hill comes on tape himself to talk about his love of audiobooks and his aural-centric (and highly literate) family. It gives me some hope that maybe Joe will treat us by crafting a full-on audio drama one of these days. Is that too much to dream for? After all, this year we saw Orson Scott Card personally re-write Ender’s Game as an audioplay and saw Neil Gaiman’s Neverwhere transformed into a star-studded radio drama. Here’s to dreaming.

Though I’ve just learned that Joe Hill is promising to get naked if the print version of the book hits the NYT bestseller charts, my vote is to pick this up on Audible, load it to your player of choice, and take it with you on all the road-tripping you’re going to do this holiday season. It may make you wish grandmother’s house was just a few more miles down the road… and keep you looking in your rear-view mirror for a sinister black Rolls-Royce.

Disclaimer/Selly sell: Audible is a sponsor of our podcast and you can get a free book (such as Joe Hill’s NOS4A2) by signing up at: www.audibletrial.com/radiodrama. But I wrote this review because I wanted not, not because I wanted you to buy anything. Well, that’s not true. You should buy Joe’s book.