This week Malleus kicks off a 3-part look at ballads that blur the boundaries between song, storytelling, and the spoken word. First up is the bad man, Black folk anti-hero Stagolee, in what I guarantee is the best and most wildly imaginative retelling of his legend that you are ever going to hear.

Julius Lester’s “Stagolee” is lightning in a bottle: drink deep, and be electrified. 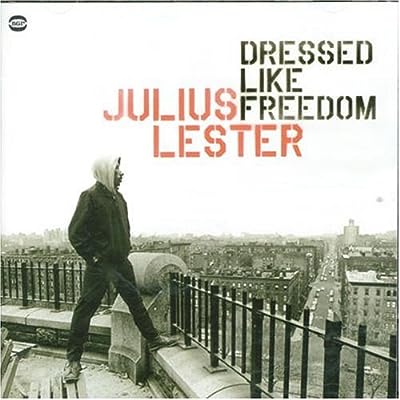 Availability: The LP has been out of print and hard to find for decades, but Ace records recently came to our rescue with their excellent CD retrospective, “Dressed Like Freedom”, compiled from Lester’s two Vanguard albums, “Julius Lester” (1965) and “Departures” (1967). Although Ace’s compilation lacks one of my favorite tracks, “You can’t make me doubt it”, it does contain all the spoken word material from the two LPs. “You can’t make me doubt it” and the other omitted tracks (actually, all the tracks) can be downloaded from itunes.
“Dressed Like Freedom” is a British release, currently available as an import through Amazon.com and other sellers. It’s a solid album that is well worth the price.

You may be the Sheriff, and you may be White, but you ain’t Stagolee.

Now deal with that.

Pete, looks like I’m going to have to use one of my giant death thunderbolts to get that Stagolee.

Excerpts from the book Black Folktales by Julius Lester, 1969.

Emerging during the Civil rights era as an activist, Lester made his mark working with the Student Non-Violent Coordinating Committee (SNCC). Over the course of the long career that followed Lester became a radio announcer, a university professor at the University of Massachusetts at Amherst, and ultimately a celebrated children’s book writer, authoring among other works the award-winning To Be a Slave. I had the great good fortune to experience his wry eloquence directly when Lester, a convert to Judaism, gave a frank and penetrating lecture on “Blacks and Jews” at my college back in the 90’s.

But when I first discovered him in the mid 80’s I had no idea Lester was anything but a great Blues singer. I was working as a sound engineer for the children’s radio drama workshop at KOPN, a community radio station in Columbia, MO. A curious white boy exploring the Blues for the first time, I’d browse the station’s collection when I got a break and listen to old records in the editing studio. I didn’t know Julius Lester from John Lee Hooker back then, and I count that ignorance a very good thing. Otherwise I might have overlooked the lesser-known Lester’s debut, “Julius Lester” (1965), and missed one hell of an album.

Although all the songs on “Julius Lester” were accomplished, it was “Stagolee”, an inspired blend of Blues singing and spoken word storytelling, that captured my imagination. “Stagolee” was a real-life St. Louis pimp named Lee Shelton, who was tried and convicted for murdering William Lyons on Christmas Eve back in 1895. A legend grew up around the deed and the man, and it took such vigorous root that this minor criminal ended up becoming a major archetype in African-American folklore. Stagolee’s crime also inspired popular songs, and countless versions of them have been and continue to be performed. After Lester’s, my personal favorite is Taj Mahal’s hauntingly delicate tribute. Most performers focus exclusively on the events leading up to the murder, a card game gone wrong, and finish with the cold-blooded execution of Lyons.

According to the liner notes, Lester used to sing “Stagolee” to his one year old daughter, improvising spoken word segments between verses. Not a song I’d sing to a baby (although Taj Mahal’s version sounds so sad and sweet it could be mistaken for a lullaby), but I’m glad Lester did: it unleashed his febrile imagination, and he built up an elaborate mythos from this simple tale.

Lester’s version begins like standard Blues renditions of “Stagolee”, but things take a turn for the fantastic after Stagolee is hung by a Sheriff’s posse. Stagolee is so bad that his neck refuses to crack, and the lawmen are forced to let him go. Stagolee goes on to live a seemingly immortal life of sin until he attracts St. Peter’s attention, and St. Peter takes the case straight to the Lord. Sitting in a “red rosy rocking chair” that conceals a stack of “giant death thunderbolts”, Lester’s Lord is a cross between your irascible grandmother and Zeus. The Lord summons Death from the stables and sends him to collect Stagolee, but Stack isn’t impressed by the pale-looking white man and waves his gun in the Grim Reaper’s face. Flustered, Death rides off, and it falls to God Himself to settle Stagolee.

Which He does. With a thunderbolt.

BOOM!
Can’t mess with the Lord too much, you know that.

But you can’t keep a bad man down. Worried that Gabriel can’t swing, Stagolee refuses to wait for judgment day and crawls out of his grave, headed for Heaven . . .

The Stagolee story traditionally veils resistance to white oppression beneath a thin covering of Black-on-Black crime. The songs are superficially disapproving, but subtly admiring; Stagolee murders a black man, but he is so bad that corrupt white law can never have him. And Lester’s song gives Stagolee’s resistance a Southern, Civil Rights era spin. The real Stagolee murdered Billy Lyons in St. Louis. Most songs about Stagolee don’t mention where the story takes place. But Lester relocates the Stagolee legend to the town of “Hang-a-N*gg*r, Georgia” where all trials are “conducted Southern style, ‘N*gg*r you guilty’.” ?After this article first went up, Julius Lester emailed me a response. ?His comments on the song’s placement were interesting, and he’s kindly permitted me to share them here:

“The recorded song-story precedes the written, and at the time, I think the consensus was that the actual?Stagolee lived in Memphis.?Scholarship?since them moves the story to St. Louis. But I think in any event,?I would have placed it in Hang-a-Nigger, Georgia.” – Julius Lester

It’s a Jim Crow world so racially bleak that Stagolee’s criminality is almost incidental – justice only exists for those bad enough to make it or take it. Traditionally the Stagolee ballad carries a mournful air, but despite the dark setting and theme, this “Stagolee” is anything but depressive. Here sadness is replaced with the sizzling Black outrage of the 1960s, balanced but not watered-down by Lester’s razor-sharp wit.

That wit combines with a syncretic dash of Greek myth, a side of Christianity, and a heaping helping of African-American oral tradition to raise Lester’s “Stagolee” to a new level. Lester sends Stack on an Odyssey through Heaven and Hell, both of which turn out to be just as segregated as Georgia. A sheepish St. Peter tells Stack why there are no black people in Heaven, hemming and hawing:

Stagolee didn’t wait for another word, he took off goin’ down to Hell.

And how does Stagolee’s descent into the Inferno turn out? Let’s just say Milton’s adage from Paradise Lost, Book I holds true: “Better to reign in Hell, then serve in Heav’n.” Thus Lester’s afterlife narrative is at once entirely new and entirely in keeping with Stagolee’s subversive appeal: “Better a bad life, than a life serving corrupt White masters.”

Julius Lester’s “Stagolee” is like no other, taking off where most versions end. The vividly re-imagined story is ably served by Lester’s voice, strong when singing, loose and sharp and full of sly humor when narrating. His guitar playing is solid rather than virtuoso, but he makes simple chords ring out with languid, insouciant honesty. There are some minor flaws – Stagolee’s gun seems to change from a .41 to a .44 depending on which rhymes better at the time, and Lester flubs one line (“Now Bill-Stagolee . . .”). But for comic timing that goes right for the gut and a story that intoxicates the mind, you really can’t get much closer to perfection.

All in all, this Civil Rights era take on one of Black folklore’s darkest archetypes is a jagged tour-de-force. My highest recommendation.

And if you like the recording, check out Lester’s Black Folktales (1969), which takes the story even further. It’s a bit less angry – no “Hang-a-N*gg*r, Georgia” – but more developed. And after hearing this song, you’ll relish the opportunity to walk a few extra miles with Stagolee on his Dantesque journey between Heaven and Hell.