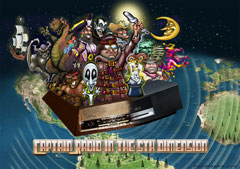 Captain Radio here with a review of Hollywood Theater of the Ear’s 2010 production of Saint Joan by George Bernard Shaw.

Seeking reparations with his audience after alienating many through his outspoken pacifism during World War I, prodigious Irish playwright Shaw quietly staged a New York road-test premier of Saint Joan as 1923 came to a close.

Three months thereafter, the play opened in London to acclaim and featured distinguished actress and close friend for whom he personally wrote the lead role, Sybil Thorndike.

Now gifted audio drama director YURI RASOVSKY artfully melds the talents of actress AMY IRVING, as the gung-ho French farm maiden-turned-warrior by the “voices” in her head, to those of a veteran male cast to bring us a fresh and energetic revival.

For example, note how he has Narrator John Lee deftly set both scene and character aspect:

In his preface to Saint Joan (nearly as long as the play), Shaw insists the work contains no villains, only patriarchitypes – unwitting but darkly sincere in defending the end of their feudal age – and precocious Joan, the sudden spectacular cometary come to catalyze what must be.

The men view Joan as an astonishingly disrespectful teenager and likely heretic, perhaps even a sorceress, who, unfortunately, gets the dirty work done they cannot. Eventually, they will betray her.

In this scene in the Rheymes Cathedral following the “miracle” coronation of Charles the VII, Irving’s maid uncompromisingly reveals to these defiant feudal lords, as well as a fearful church prelate, the extent of their blindness:

Author/critic T.S. Elliott observed that, although the play was not the masterpiece some claimed it to be, it “seems to illustrate Mr. Shaw’s mind more clearly than anything he has written before.”

Rasovsky’s highly competent and satisfying effort, then, represents both an excellent introduction to Shaw and a stand-out performance.

Until next time, Audionauts – this is Captain Radio, signing off!

Editor’s Note: This is a really, really good production. We encourage you check it out. Also see our interview with Yuri Rasovsky where he talked about casting this production.