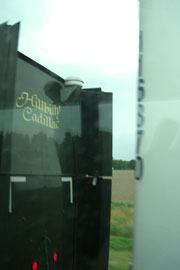 Well, it was with a twinge of hopeful melancholy that I said adieu to the beach at 1 in the morning and caught three hours of sleep before making the final arrangements to head to the airport. Thirteen hours later, barely hanging on with catnaps through the day, hundreds of milligrams of caffeine and sheer iron will, here I am with giddy expectation at West Plains, MO for the National Audio Theater Festival.

It was my first flight with Air Tran and my initial reservations quickly melted away upon seeing a big logo emblazoned on the Boeing 717 I boarded my first leg of the flight — The flight has XM Satellite Radio! What a treat, especially for someone who’s been on the fence like me, wondering where it’s worth to buck up 13 bucks a month for Sonic Theater. Well, my mind was changed for about twenty minutes as I caught the end of Tom Lopez‘s Moon Over Morrocco (little was I to know I’d meet the man in a little over 8 hours) before the station roughly seguewayed into a four-hour session of Jane Austin’s “Emily” read by a narrator propped up by life support. Oh well.

After being cramped in flight for several hours and changing planes twice, I staggered off in Memphis and quickly found the band of hoodlums assembled for the NATF shuttle. And boy, did I know I was home!

First was Luke, with Sennheiser headphones around his neck, then Tom Lopez himself, Joel Pierson of Mind Ear’s Audio, the ebullient Bill Dufris and dozens of others. It’s pretty cool when you can have known someone for less than four minutes and already be talking about multitrack editing rigs and the merits of Sony Vegas vs. Adobe Audition vs. ProTools.

All the flights eventually made it in and so our merry band was off, for yet another heavy leg of the journey — the 3 1/2 hour shuttle right to West Plains proper, across the corn-fed plains of south Arkansas. We marveled about sights such as the “Kum & Go,” towns of Pop. 112, and Buckshaw county where you should be prepared to be searched for drugs — zero tolerance! as well as talked shop even more before we all succumbed to the lack of sleep and lull of the comfortable tour bus.

Rain storm, corn fields, and relatively few incursions with angry locals later, we crossed into West Plains and the weary travelers could set our bags down… As well as pick up a heavy Conference packet with cool Sennheiser schwag and an amazing workbook. With hardly a breath of fresh air, we were on our way again to an opening reception at West Plain’s Cafe 37.

And so it began… more talk with dozens of writers, musicians, engineers, voices, veterans and budding amateurs. In addition to a great meal (where I did my best but still couldn’t stop the wait staff from plying me with wine) we saw the many founders of the conference take the mic and enchant us with stories of the festival’s modest, but spectacular, origins.

Enthralled with the promise of playing with really cool gear, as well as learning how to use it better than ever before, and generally just bask with others who are serious about this art, we all went home to sleep to wonderful dreams of microphone elves.

All to start a 12-hour workday on Sunday.