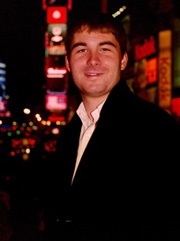 This week we speak with James Kicklighter, a talented young filmmaker who was recruited to direct the new documentary on the golden age of radio, Theater of the Mind. The project was sponsored by Georgia Southern university and kicks off a decade-long celebration of radio for the Broadcast Education Association. It also marks the beginning of a long term research project on radio.

The cast of the documentary includes:

We talk with James about how the project came together and what learned about the age of radio, and the role of audio arts as it remains in our cultural backdrop today.

Theme music by Roger Gregg. ?The offer still stands — first three people to correctly guess the Gerry Murphy Poetry where the theme comes from get a Crazy Dog CD shipped to them free of charge!

Theater of the Mind Credits: