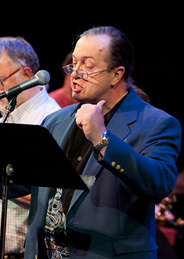 This week we talk to an all-out audiofile — Richard Fish, actor, producer, and promoter based in Bloomington, Indiana. Since first inspired by the merry madness of the Firesign Theater, Rich has been transformed by radio and contributed in big ways to the form. This week we talk to him about his long participation in the National Audio Theater Festivals and the awesome experiences (and interesting people) that he’s encountered because of it.

But first, a visit to a small and tainted town in Maine, where the Hayward Sanitarium houses the most strange inhabitants. What’s wrong with their patients and why do they like to go out at night?

In a stunning coincedence, Georgia Southern has just posteda trailer for the radio drama documentary Theater of the Mind to YouTube. Our guest today, Rich Fish, talks about the weirdness of talking about radio in video!

I got a chance to screen the video and think it’s great… especially knowing the kind of time frame they had to put this thing together in. ?More to come on that.

Also, don’t miss Rich’s upcoming live broadcast on WFHB (THIS Saturday, June 13, ?at 8PM EST)… And you can listen to many of his previous shows on the WFHB archives.