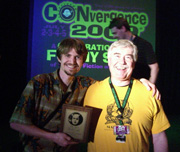 This week I had the incredible honor, pleasure, and generally awesome time of heading to Minneapolis, Minnesota to pick up the Ogle Award for my production, Waiting for a Window. To celebrate, we have it on the show for an encore presentation today.

But not only did I get to pick up a rad award, but I got to hang out my radio buddies Brian Price and Jerry Stearns and finally meet Chris Markman, Great Northern Audio Theater‘s producer, and Jeff Adams of Icebox Radio Theater, who we’ve featured on the show previously and who runs the Icebox Radio streaming radio drama station. Oh, and I got to see really kick-ass sci-fi and fantasy costumes.

I have a bunch of great photos from the live event, which you can check out on FinalRune’s Facebook page. Since I’m about to do my first live show in Halloween, it was a great primer for the calm in the midst of chaos a director needs to have while doing a live show, not to mention a really fun time.

I’ll be talking with Brian and Jerry later today about their work with Mark Time/CONVergence and next week we’ll feature a live show from one of their previous years… But for now, enjoy “Waiting for a Window!”