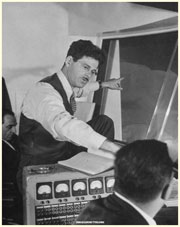 In a bold coup for Radio Drama Revival, we look back to yesteryear and the golden age of radio drama to celebrate one of its luminaries – the magnificent Norman Corwin, also called the “poet laureate of radio,” who celebrates his 100th birthday this month.

Wow! That’s a lifespan that encompasses a lot of changes in America, and a lot of radio plays – and a pervasive and unstoppable optimism present in all of his work.

So, the whole month of May is Corwin-time – starting today, with the re-broadcast of that seminal radio play celebrating the 150th anniversary of the Bill of Rights, “We Hold These Truths.”

In a time where cynicism and jadedness have never been stronger in America, it may be more important than ever to look at where we’ve come from and what we’re capable of.