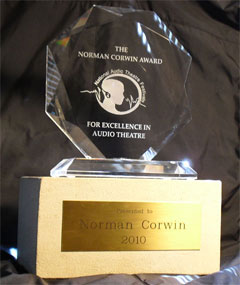 This week we continue our celebration of audio luminary Norman Corwin, who recently celebrated his 100th birthday.

We have a report of the birthday bash held in Hollywood care of fellow audio artist Rich Fish:

During their remarks, Phil & Melinda announced the National Audio Theatre Festivals’ creation of the Norman Corwin Award for Excellence in Audio Theatre, which will be given every year on Norman’s birthday. This received great applause from the hundreds of people in the audience.

Note the snazzy award off to the right. Rich also sends this very interesting nugget of news:

NO JOKE – Scientists have succeeded in using a SINGLE MOLECULE as a computer.

This is not a gag, or an Internet rumor.

“Using quantum interference – the vibrations of the atoms themselves – the team was able to run the complete discrete Fourier transform extremely quickly by encoding the inputs into an optically tailored vibrational wave packet which is then run through an excited iodine molecule whose atomic elements are oscillating at known intervals and picked up by a receiver on the other side. The entire process takes just a few tens of femtoseconds (that’s a quadrillionth of a second).”

If I was a molecule, I’d be pretty excited too.

THE UNDECIDED MOLECULE, a brilliant 1945 fantasy by Norman Corwin, suddenly looks a lot more like Sci-Fi than fantasy. No one, I suspect, will be more astonished than Corwin.

On second thought, I could be mistaken about that…his Emersonian Receiver is really, really good.*

* “We lie in the lap of an immense intelligence, which makes us receivers of its truth and organs of its activity.” — Ralph Waldo Emerson

And to celebrate! The 1945 classic, The Undecided Molecule. Enjoy!