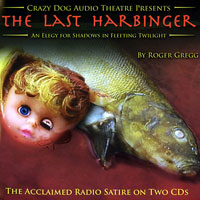 This week we feature two more delicious bits of audio – a new original five-minute audio short by FinalRune Productions called “The War on Poverty.” After so many successful wars on ideologies, America decides to fight its most entrenched evil – poverty.

Followed by a redux of The Last Harbinger, the chilling and darkly satirical story of Moloch by Roger Gregg. In light of all the madness in our world today, it seemed about time to feature the show again. Part 1 of 5.