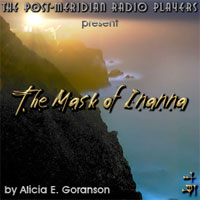 Holy crap! It’s episode 200! After nearly 4 years of radio drama podcasting we hit another round of triple digits. A pretty cool milestone and a great program to share to celebrate.

We’re featuring another installment of The Mask of Innana, an original mystery series by the Post Meridian Players who you probably have heard about through their live shows in the Boston area.

The Mask of Innana, I’ve learned, was inspired in part but the uncompromisingly creepy Nightfall series which aired on the CBC (Innana series creator Neil Marsh, in fact, created the best online resource for the show out there).

Like a The show follows aging radio star Leonard Allen, whose series After Dark ended abruptly after a betrayal from a trusted friend. Now, years later, a stranger comes offering Allen a most unusual role.