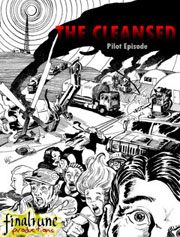 Hooool-ey, mol-ey, folks. After months of anticipation we’re eager to finally have our sweaty paws on a copy of FinalRune’s remastered podcast-safe edition of The Cleansed – Episode Zero. This thing is crazy!

On Halloween, 2038 the world is a precarious place. We’re running dangerously low on oil and the electric grid is down on most of the East Coast. The National Guard maintains a state of martial law and food supplies are precarious. A group of soldiers is ready to kick back and enjoy a leisurely night of – what a concept! – radio drama. It’s the 100th anniversary of “War of the Worlds” and a group of university students want to re-create it before the captivated crowd.

Stephen King‘s own rock n’ roll radio station, WKIT, prepares the live broadcast to a desperate public. But this time, it’s not Martians that threaten the demise of humanity – but ourselves.

So begins The Cleansed, a massive post-oil audio epic that FinalRune has been working on for years. They’re aggressively fundraising now and hope we can get your support to keep more episodes coming as they go into production this fall. More importantly, they want you to tell your friends!

And, speaking of kick-ass audio drama, we Captain Radio‘s splendid review of 1918, a new larger-than-life audio serial that explores the question of: how would World War 1 be different if advanced alien weapons were available?

Don’t miss this episode of the ‘pod.