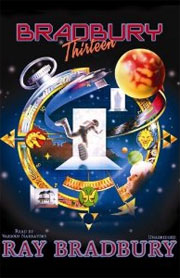 Six weeks of awesome sci-fi on Radio Drama Revival culminates this week with our feature of Bradbury 13, one of the most splendid productions ever to grace the annals of radio drama history. If you ever doubted how stereo sound changed the way we designed sound effects, let this production convince you.

With special permission by creator Michael McDonough, we feature the striking “A Sound of Thunder” by Ray Bradbury, a drama about the trouble humans get themselves into when they meddle with the past… and a show with a HELL of a good Tyrannosaurus Rex sound effect!

Speaking of effects, in the second half of the show we speak with Mr. McDonough about how his love of recording sounds turned into this amazing creative project that ultimately lead to a rich career in film sound.