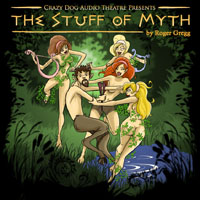 Well, they call it Greek tragedy for a reason – and we have it in full force this week with the conclusion of Roger Gregg’s The Stuff of Myth. Orpheus finally gets his chance to plead for his Eurydice back and – by God – he gets her! But whatever you do, dude… don’t look back. Phil Proctor and Melinda Peterson truly shine in their unforgettable renditions of Hades and Persephone.

First up, Captain Radio focuses on emerging producer Tanja Milojevic, whose Lightning Bolt Theater of the Mind production has a new original tale out, “The Swamp.” Don’t get sucked down.

We wrap with Cables to the Ace: 83 from Roger Gregg

Cables To The Ace can be found in The Collected Poems of Thomas Merton.