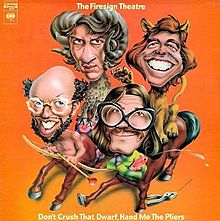 Audio comedy was never quite the same thanks to the antics of The Firesign Theatre, the legendary multi-trackin’, sound embellishing, sterephonic surrealistic psychedelic merry band of Phil Austin, Peter Bergmen, David Ossman and Philip Proctor.

In addition to their legendary studio albums (such as Don’t Crush That Dwarf, Hand Me the Pliers!

MEGA THANKS for Phil Proctor for giving us permission to broadcast this terrific stuff. We also take time to shout out for the National Audio Theatre Festivals, who are preparing for their annual pilgrimage to West Plains Missouri later this month.

Also, Captain Radio is here to cover Voices in the Wind from Canada, whose latest production is “Every Now and Then.”