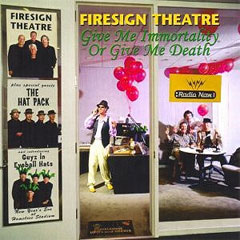 We conclude our feature of the legendary Firesign Theatre, the “4 or 5 Krazee Guys” (Phil Austin, Peter Bergman, David Ossman and Phil Proctor) whose embellished sterephonic comedy recordings altered the minds of a generation. After a 17 year hiatus they returned in 1998 to warp our minds again with this lampooning of the end of days, Give Me Immortality or Give Me Death.

After 13 years this album is still shockingly relevant, with end of the world fever, crazy used car deals, problems with the internet, celebrities gone haywire, and big budget beer.

In addition to their legendary studio albums (such as Don’t Crush That Dwarf, Hand Me the Pliers!

MEGA THANKS for Phil Proctor for giving us permission to broadcast this terrific stuff. We also take time to shout out for the National Audio Theatre Festivals, who are preparing for their annual pilgrimage to West Plains Missouri later this month.