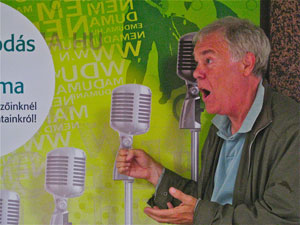 With the weeklong National Audio Theatre Festivals 2011 workshop just behind us, we catch up with Captain Radio who were our ears on the ground in West Plains as well as Phil Proctor of the Firesign Theatre.

Phil talks about his career in audio starting with the legendary comic studio albums of Firesign in the countercultural 60s and 70s and transition into a career of voice acting for films, TV, animation and video games.

Phil is also a judge for the Mark Time Awards, which this week gave out awards to a number of producers including Jonathan Mitchell, myself, 1918, Brad Lansky and the Anti-Starc, Whoever Wishes (by Tekdiff, who get a special shout-out from Phil Proctor), We’re Alive, Electric Vicuna, and The Witch Hunter Chronicles. Whew!

Finally, we wrap with the 2010 Mark Time radio show – and promise audio from more from #CVG2011 next week!