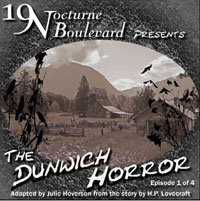 In a backwater town in 19th century New England, a trio of professors from Miskatonic University uncover something dreadful. Something invigorated by this book, the Necronomicon… To commemorate their third anniversary, 19 Nocturne Boulevard is featuring this four-part audio nightmare by grand master HP Lovecraft: The Dunwich Horror.

We feature the first of four episodes, as well as take a moment to reflect on Norman Corwin’s passing, talk up this weekend’s Friends of Old Time Radio convention, and savor another promo for FinalRune and Aural Stage’s upcoming horror feature, Intensive Care.

And if all that wasn’t quite good enough… we have a Captain Radio review of the third season of Mask of Innana! We are rich in audio, folks.