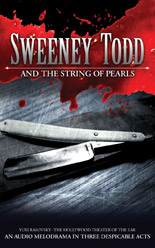 On Fleet Street in Olde London there once lived a barber called Sweeney Todd, whose greatest pleasure was “polishing off” his customers who found themselves first bereft of wordly goods and then shuffled off this mortal coil. Those unlucky enough to go in for a shave found themselves ground up into some famous meat pies… A secret that continues for years until Sweeney is wrapped up in a story of a mournful lover and a lost precious string of pearls.