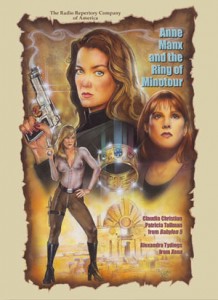 This week on the show we again feature the Radio Repertory Company of America, a group that combines star-studded casts with clever, sassy, sci-fi scripts and soaring sound design for a listening experience quite beyond anything else out there. This week, we have the esteemed pleasure of featured a segment from their award-winning tale, Anne Manx and the Ring of Minotour.

Minotour hurls us into a web of intrigue swirling around an ancient temple, a mysterious ring – and a legend that offers the chance for someone to actually become a god. Jean Richmond’s murderous lunge for ultimate power forces Anne Manx to risk her own soul for revenge. This gripping SF thriller stars Claudia Christian (from TV’s Babylon 5) as the hard-driving future detective, B5’s Patricia Tallman as the evil Richmond, and Alexandra Tydings (“Aphrodite” on Xena) as Charlotte Miller, with co-star Richard Fish as both Jack and Rory (yes, THAT Richard Fish!).

Following the drama we have an exclusive interview with RRCA creators, Larry Weiner and Angelo Panetta.

First up, week 15 of The Cleansed – wherein we find our heroine in the dark bowels of the pig man’s barn. Is there an escape from this nightmare?