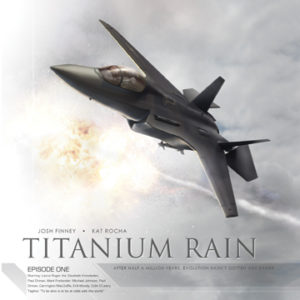 This week on the show we have the searing hot rocket-paced adaptation of Titanium Rain, one of the most acclaimed (and controversial) graphic novel series in recent years. Scripted by the book’s author, Josh Finney, this audio drama remains completely loyal to the original to the material, yet offers new and expanded scenes that were not in the printed version.

It was produced by our friends at the AudioComics Company – Bill Dufris, Lance Axt, and Elaine Lee – who we speak to, along with comic book writer Josh Finney, in the second half of the show.

First, we fire up with the gunmetal hefting action of the First Act, where we’re introduced to a world where China and America are locked in a brutal war and soldiers are bioengineered to fight. It’s a world where the conflict between man and nature has reached its latest peak – and where the limits of the human experience are cranked to the next level.

Strap in, crank it up, and let it fly, this is one smokin’ hot production.