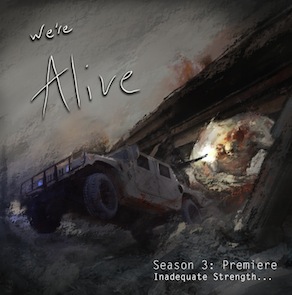 Chilling sound effects, a huge and diverse cast that has come together like clockwork, and tight writing that keeps you wound in suspense hour after hour are the hallmark of zombie podcast sensation We’re Alive, a show that proves that horror is best served cold, on the omniplex-sized theatre of your imagination. We’ve been following the show since 2009 – back when it was first billed to as “not your average zombie show” and now we revisit it as it comes into its 3rd year, with 7+ million downloads to date, an Audie Award nod, and a bright future.

We’re Alive’s popularity is spreading – shall we say – like a virus, and we talk to creator Kc Wayland who has yet bigger hopes, that “Eventually there won’t be anyone left who hasn’t heard it.” We talk production, story craft, and a lot about the publishing/marketing that goes into a show like this.

First up, our latest chapter of The Cleansed, where we enter the chapel of the Believers with a tease for the upcoming free release of Minister of Chance: Episode 3.