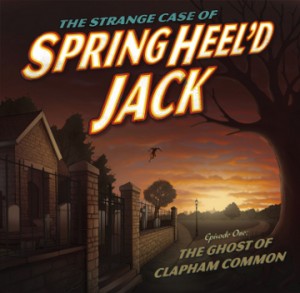 Our second week of our 5th festival of audio drama horror is the thrilling tale of murder in the city – The Strange Case of Springheel’d Jack by Wireless Theatre Company.

Wireless, who started the same year as RDR, has grown to one of the world’s premiere independent audio drama producers.  Springheel’d Jack is a new intermittent series (3 episodes are out and I hear 6 more are in production) and joins other, truly dark work they’ve produced as well as ‘completely different’ fare such as the comedy We are the BBC.

I should also mention this work took the Silver Ogle Award this year, and I got to meet with writer Robert Valentine and Wireless producer Jack Bowman at CONvergence out in Minneapolis.

First up: The Cleansed, Episode 8 Part 2, where scotch, Wagner, and tales of the old times have their way.