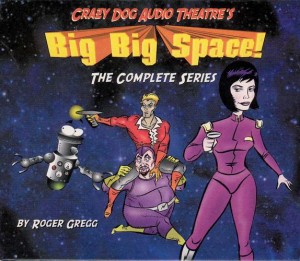 Captain Roslyn Sane and the loyal bridge crew of the starship Amadan confront the picketing members of the ship’s Expendable Characters Union. Tired of cleaning the ship’s teeming corridors and having no speaking parts other than screaming just before meeting horrible deaths, the Expendable characters are led to mutiny by the peg-legged trolley-man ‘Big Jim Chancer’ and his Maoist red parrot Polynomial. Their aim? To launch their own spin-off show.

This bizarre and hilarious romp was recorded live – live cast, live music, live effects, and live audience – and harkens back to the Golden Age of radio comedy. Just… don’t get too comfortable.