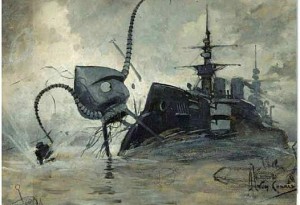 This week we take a bow to radio drama history by clobbering Grover’s Mill New Jersey with a big ball of fire and pissed off laser-toting Martians. Yes, folks, it is the War of the Worlds – and one of the most exquisite re-creations of it ever produced, the 50th anniversary production by Otherworld Media released in 1988.

Why the excitement? Because of our crazy contest, of course! To celebrate the 75th anniversary of War of the Worlds, Radio Drama Revival is proud to be promoting a new WoW radio drama re-creation contest.

Basically, produce a play that is:

That’s a summary, but full contest rules (and news on the awesome prizes!) is available at: http://www.waroftheworlds75.com/.  You’ve got till May 5, 2013 to produce your show.

We also mention that time is running short to get your shows into the Mark Time Awards!  Go to: http://www.greatnorthernaudio.com/MarkTime/MarkTime.html and submit your fantastic sci-fi and fantasy audio dramas from 2012.