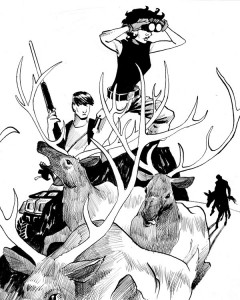 Week 2 of our focus on The Cleansed; this week we have back-to-back episodes from Season 1 of The Cleansed which is now available through Blackstone Audiobooks.

Fifteen years have passed since the traumatic events of “The Breaking,” in rural Maine a group of survivors has soldiered on, eeking out a hardscrabble existence.

Far south, John Prophet has continued his battle for freedom. But John Prophet’s luck has about run out. Even as he attempts one more daring action, enemy soldiers crowd down around him. He is forced to make a difficult decision in a train station. And then, he sets his feet northward, and comes crashing in like a lightning storm to the bucolic life David and Sam have forged in The Refuge.

Maria and Luke have grown up knowing only the austerity of The Refuge. What will they make of this mysterious stranger and the storm of danger that surrounds him?