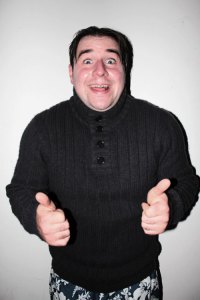 We continue our focus on the darkly hilarious portraits of post-recession Dublin in Gareth Stack’s “Any Other Dublin.”

Jolita Grīnberg is a a young Irish writer. Jolita struggles with a lack of creative recognition and the caprices of an unappreciative universe.

Jolita is young creative woman, originally of Latvian origin, who writes and performs on top of her day job. She’s currently attempting to become the next Kindle publishing sensation. Jolita is active member of the Dublin live action role play and burlesque communities. Despite her many creative outlets, Jolita struggles with low self-esteem and weight issues. Jolita works by day in a call centre, doing surveys for the Dept of Agriculture, and lives with her best friend Sebastian, and her cats Lord British and Noroku. She has a second job in a craft market – selling her own hand-made corsets. Jolita’s parents are members of a new religious group. Although warm and supportive, they’re eager for Jolita to marry and settle down. Jolita’s dream is to emigrate to London, to live in Camden and write for Coilhouse magazine and publish her first novel.

Sean Og is a political activist, amateur clown, psychonaut and raw food vegan. He’s currently training as a sex positive psychotherapist. Sean Og was involved in Occupy Henry St, and has campaigned at Rosslare against the Tesco pipeline. Sean Og’s worldview is in crisis as he attempts to balance the demands of becoming ‘respectable’ with his countercultural ideals. His socially unacceptable conspiracy theories, use of psychedelics and interest in the occult come into conflict with his attempts to become a ‘professional’. John is in a long term relationship with an asexual woman’Bríd’, who’s currently finishing her PHD, and he’s having difficulties accepting her sexuality.

Any Other Dublin is produced by Dead Medium, creators of The Invisible Tour Guide, the Emerald Arts and Been There Seen There. Written by Gareth Stack (visit his website where you can find other finished works: http://garethstack.com/)