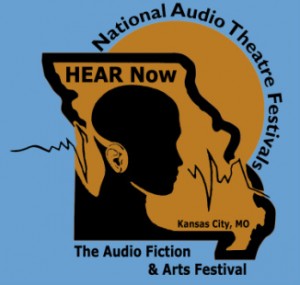 This week, an interview from the terrestrial version of Radio Drama Revival – an interview with Sue Zizza (Sue Media Productions) the producer behind the ‘illuminated’ audiobooks of Ellen Kushner (all of which have been nominated for Audie Awards, and one – Swordspoint- being a winner) and numerous prior productions. She is also a major force behind the National Audio Theater Festivals (NATF) who has transmogrified their annual weeklong production training workshop into a weekend-long festival celebrating the art of the spoken word, the HEAR Now Festival.

The 2nd annual HEAR Now will take place from June 19-22 in Kansas City, MO.  HEAR Now is the audio equivalent of a film festival for contemporary audio story-telling in all its forms: live and scripted solo performances, multi-voiced, classic radio drama, experimental narrative, and much more. This four-day Festival will offer a multi-faceted program showcasing the many forms of audio fiction and sound art storytelling in theaters and other “listening” venues. The Festival will present audio fiction programs that exemplify traditions of craftsmanship, as well as aesthetic and technological innovation.

We listen to Sue talk about specific highlights to expect during the weekend, as well as what the festival means for the health of audio storytelling in general, and then hear a sample from her latest work, “The Fall of the Kings” (third in Kushner’s Riverside trilogy).