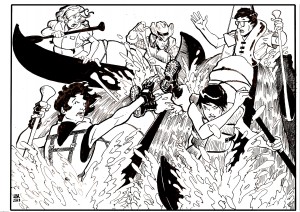 This week we re-play “The River,” an episode from The Cleansed: Season 2, which was recently shortlisted in the Radio Romania Grand Prix Nova. We didn’t make it to Romania, but our friends with The Wireless Audio Theatre (also shortlisted, for their splendid Season 2 of the Springheel’d Jack saga) and they even lived to tell the tale about it: https://wirelessblogs.wordpress.com/2014/07/01/wireless-in-romania-by-robert-valentiune/

A war of words erupts between the religious sects of Saul and Paul – one on blaring television screens, and another through wind-up radios. As the sides clash for control over the minds of the people of Corinth, each hatches an idea to thwart the other once and for all.

Meanwhile, our party of heroes prepares for a dangerous descent of a raging river. Interpersonal conflict is squelched under the roar of nature. Six people descend in canoes, and only four stay in.