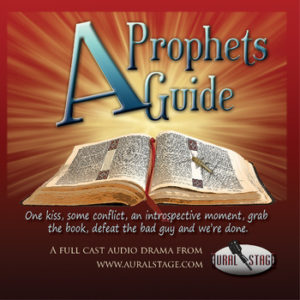 When Karl (PG Lorusso) gives up his appointed quest to chase after the Muffin Girl (Carolyn Lansom) from the local coffee shop, three prophets, Zoe (Sophia Howes), Morgan (Daniel Mink), and Destin (G. Anton Moore) team up with a six-foot silverfish named Bob (Jerry Hudson) and find themselves on a real quest in which a prophet-turned-hero is allied with a villain-turned-mentor to defeat a prophet-turned-villain to save their society from its own absurd facades.

In the second part, we have enlisted – we think -the help of the (this, that?) Silverfish to help with the journey to get the hero back on track to complete the quest… But things are definitely going to get stranger before they make sense again.  This aburdist fantasy-comedy of rules and regulations gone horrible wrong wraps up in the thrilling second part of Aural Stage Studios’s latest production, A Prophets Guide.

Followed with an interview with the show’s creator, Matthew Boudreau, and actress Sophia Howes who’s also a singer with the group Lady Lush and the Vinyls.