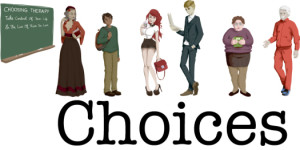 Some fantastic radio comedy from the Emerald Isle this week! Gareth Stack, founder of “Dead Medium” productions, based in Dublin, tells the story of Ainesh, an under confident, over intellectual Indian-Irish twenty something.

Ainesh has always been a victim of circumstance; working jobs he didn’t enjoy and failing to live up to his potential. Now, sacked from his factory job and thrown out of home by his disappointed parents, Ainesh is forced to train as a psychotherapist. His course is in ‘Choosing Therapy’, the philosophy that we choose our own destiny, and that everything that happens is our fault.

With nowhere to stay, Ainesh is forced to live with two of his bizarre classmates. We follow him as he learns whether there really is such a thing as choice, and if so, how he can make his own destiny.