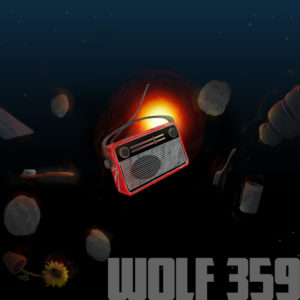 This week on Radio Drama Revival, it’s the comic sci-fi thriller Wolf 359. This genre-bending show, by turns endearing, intense, terrifying, and hilarious, is a delight to listen to – and its stars are a delight to talk to!

Wolf 359 is the story of a lonely little space station orbiting a red dwarf star, and the four personalities aboard it: Commander Renée Minkowski, a badass astronaut who has literally memorized the book on deep-space survival; Alexander Hilbert, a scientist who may or may not be utterly nuts; Hera, one of the most sardonic artificial intelligences in audio fiction; and Doug Eiffel, the lazy-but-lovable communications officer (and narrator).

Join me as I play Episode 10 of Wolf 359 – “Extreme Danger Bug” – and then sit down with Emma Sherr-Ziarko and Zach Valenti, two of the show’s stars. It’s sure to be a wild ride.