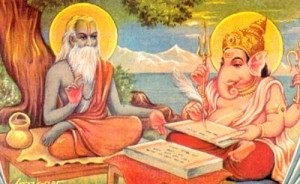 This week, it’s the Stories of Mahabharata, retold by Sudipta Bhawmik, a multitalented playwright, storyteller, and engineer. With music and immersive sound design by Avi Ziv, Bhawmik animates this ancient Indian epic, rendering it in English to delight those that have never heard it before as well as those who were raised on the stories.

The Mahabharata is thousands of years old, and originally in Sanskrit. It tells the story of two groups of warring cousins — the Pandava brothers and the Kaurava brothers — who fight over the throne. But it’s more than just a war story; it’s a story of love and curses, righteousness and evil, tricksters, poisons, and monkeys.

We’re featuring episodes 30 and 31 of Bhawmik’s retold Mahabharata: first, Bheema (a Pandava brother with enormous strength) encounters Hanuman. Then, a story of Arjuna (another Pandava, and the greatest archer in the world).