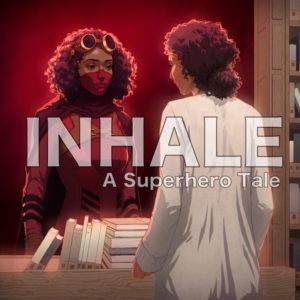 Tracy Tanner is an unassuming librarian in the small town of Hemlock, Massachusetts—but Tracy isn’t her real name, and she isn’t just a librarian. Tracy is a superhero—and she’s not supering anymore.

Join me as we dive into Tracy’s secrets in this exciting new miniseries!

I asked Rick a few questions about his approach:

What inspired you to go in a superhero direction this time around?

I’m an avid comic reader (have been since I was 5 when a friend introduced me to Spider-Man). I’ve always had it in the back of my mind to write a superhero story and the only thing that’s held me back was trying my hand at something original when it comes to powers, motivations, etc. ‘Inhale’ was originally conceived as a comic book and I’d started writing the script a while back. I felt I’d hit on something original. A young woman who is basically indestructible as long as she holds her breath. When I began to produce audio dramas I re-envisioned that script in audio form. The way I’d written the comic worked perfectly with the narrative style I produce my shows in.

I’ve noticed that a lot of your series have a direct-address element to them; usually a young woman addressing the audience, like in an audio diary or some kind of direct-address confessional. What motivates their form?

The direct-address narrative style has always been one which has intrigued me. I tend to write in the first person with short stories and a couple of novel I’ve written.Not exclusively but that is typically the voice I find the strongest when it comes to dipping into a characters thoughts and feelings. I read a lot and that style (think Nick Hornby) grabs me. It allows access into the character’s thoughts as they recount an experience. The stories I write are a bit like glimpses into the character’s thoughts and memories. There are sounds, noises, voices, all of the things that make up a memory. The listener supplies the visuals. It started with Madyson in ‘The Behemoth’ and with a couple of exceptions (The Fiona Potts Interview, Waterguns & Rainbows), has been how I approach the medium.