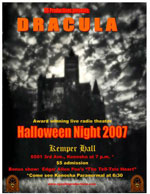 Audio fans in the Kenosha, Wisconsin area will be treated to a live production of Orson Welles’ adaptation of Dracula this Halloween.? The drama is being produced by Wisconson-based RG Productions, an audio theater group that produces faithful re-creations of old time stuff and has ties with other producers, including the Willamette Radio Workshop.? It sounds like a lot of fun, and for those of us many, many miles from Wisconsin, I hope they put it up on the web!