A welcome interlude in the Middle Ages vampire serial for longtime fans and an accessible, self-contained starting point for newcomers.? 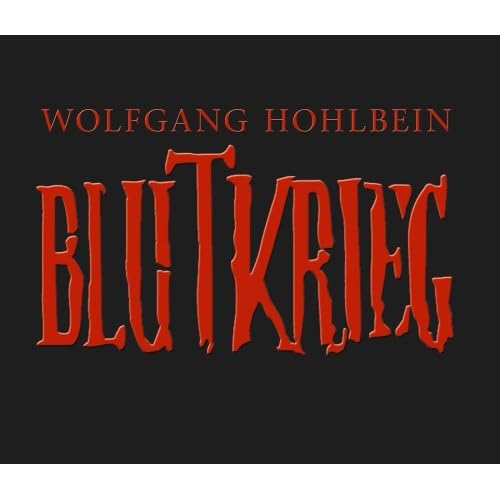 (This series was previously released on 5 individual CDs.? Although the stories are all self-contained, they are interconnected and build on one another.? I recommend this collected edition, which is considerably cheaper than buying the 5 singly.)

Blutkrieg is situated between books 8 and 9 of the dark fantasy series Die Chronik der Unsterblichen (Chronicle of the Undying.)?

Try before you buy:

The first chapter of Blutkrieg, Die Schwarze Gischt, was premiered in segments on the German ?Neurotainment? podcast and is still available.? Use the links below to download this free and fully authorized broadcast.

Perhaps we are dead.? And this is Hell.

Germany?s horror novelist Jason Dark / Helmut Rellergerd is sometimes compared to American author Stephen King, but for emotional resonance, stylistic range, and page-turning eloquence I find Wolfgang Hohlbein a better analogue to the American master.? Hohlbein is an interesting hybrid:? he has roots in pulpy German grusel-serials (Der Hexer, Raven) but seems equally comfortable penning more sophisticated fantasy / horror novels (Unheil, Der Inquisitor, Dunkel.)? Of the many German authors who have tried to bridge these genres, Hohlbein has been the most successful, particularly with his middle-ages vampire serial Die Chronik der Unsterblichen.? Chronik began in 1999 with solid fantasy novels featuring elaborate plots and sizable casts.? With Blutkrieg, Hohlbein pauses his epic narrative for an interlude of elemental pulp fare.?

Die Chronik der Unsterblichen series currently rests on the shoulders of two protagonists:? haunted swordsman Andrej Del?ny and his comrade-in-arms, stolid ex-pirate Abu Dun.? Both are vampires, which in Hohlbein?s world means they regenerate quickly, have above-average strength, age slowly, and are subject to a demonic thirst for blood, something Andrej and Abu Dun choose to resist.

Abu Dun?s grim assessment,? ?Perhaps we are dead.? And this is Hell?, sums up Blutkrieg?s bleak Waiting for Godot / Rosencrantz and Guildenstern are Dead atmosphere.? After being tricked into slaying a ship?s innocent crew, a repentant Abu Dun and Andrej set out to do the only decent thing left:? return the corpses to their Northern homeland for burial.? But the vampires soon find themselves alone and out of their depth in a frozen landscape that threatens their very survival and renders their physical and moral progress pyrrhic.? As their Scandinavian Odyssey becomes a personal hell the companions are forced to fight or make devil?s bargains with a host of malign powers, including werewolves, zombies, witches and dreamspiders.? The frigid wastes themselves are arguably the vampires? worst foe, perpetually threatening to swamp their lives and souls in a vast grey limbo.

The companions? saving grace turns out to be their devotion to each other, which not only gets them to watch each other?s backs but gives them heart and purpose.? In this sense Blutkrieg is a true ?buddy? narrative not unlike the bi-racial ?buddy cop? Hollywood films of the 1980?s.? Movies like Lethal Weapon steadfastly avoided contemporary racial schisms with a ?pass the popcorn? ethos of straight action and camaraderie.? Chronik adapts this approach to religious difference, with European Christian Andrej and Nubian Muslim Abu Dun regularly engaging in the teasing banter of their cop movie counterparts.? They maintain what anthropologists call a ?joking relationship?, defusing potentially schismatic differences through friendly one-upmanship.? It?s not hard to read a contemporary German wish to rise above the country?s sometimes nervous relationship with its large Turkish minority into Andrej and Abu Dun?s playful, empathic bickering.? Regardless, Hohlbein invests his characters with enough human depth that the selfless commitment beneath their mocking repartee remains credible and moving throughout.? Blutkrieg is ultimately a dark paean to fraternal love.

As in the first Chronik audiobook, the author himself narrates this release.? Although Hohlbein lacks an actor?s baritone timbre, his voice has the sincerity and urgency of a young priest?s.? He doesn?t so much perform these morality plays as testify them, drawing listeners in with his mesmerizing, quasi-confessional undertone.?

For this long-time fan, hearing Hohlbein spin new tales of Andrej and Abu Dun feels like returning to a desolate but beautiful homeland.? Hohlbein puts out a new chapter of Chronik der Unsterblichen every year, but so far only the first two books and Blutkrieg have been produced as audiobooks.?

Here?s hoping for many more.

Below – The vampire Andrej returns home in the comic book adaptation of the first novel in the Chronik der Unsterblichen series.