Brimming with Gothic atmosphere, Larry Brent’s first audiobook adventure is a nostalgic reminder that as good as dramatic adaptations can be, an author?s original text has a charm all its own. 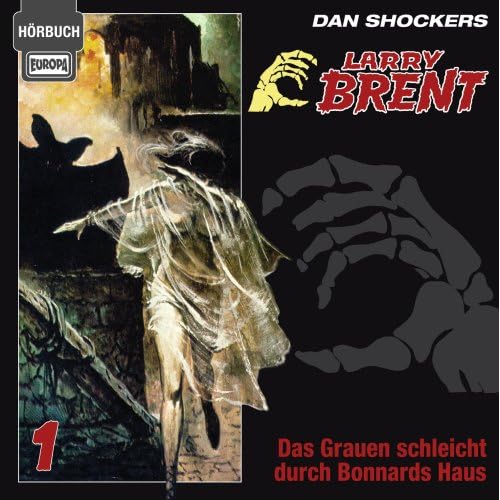 Read by Rainer Schmitt.
Produced by Lausch for Europa

There?s something about a hero named ?Larry? that kills me. The name is so salt-of-the-earth that one of the minor characters in the movie?Pee-Wee?s Big Adventure, ?Amazing Larry?, was funny mostly because his name sounded like an oxymoron. Don?t get me wrong ? I love the Larrys in my life, including one of the sweetest and most honorable elderly men I?ve known and a college buddy with the most infectious laugh I?ve ever heard. But Larrys are sadly neglected when it comes to hero names. Well, Larrys of the world, take heart: in Germany your name is the stuff of legend.

That is, the legend of PSA secret agent Larry Brent, investigator of the paranormal. What, another German occult detective? Not another one, my friends: the first one. Dan Shocker?s (J?rgen Grasm?ck) square-jawed, laser-gun toting adventurer debuted in 1968 in Das Grauen schleicht durch Bonnards Haus, spawning a long-running series and inspiring a new horror-themed genre of German pulp publishing. This audiobook production of Das Grauen carries some historical interest then, since Larry Brent?s first adventure kicked off the occult detective trend that still defines a large segment of the German audio drama market.

What?s most unusual about the character Larry Brent in this day and age is his nationality: American (United States). German pulp writers, as a general rule, steadfastly avoid creating German heroes, generally preferring English-speaking protagonists (John Sinclair, Gabriel Burns) and exotic locales like Britain or Canada. Americans aren?t all that popular in Germany now, and it?s rare to see an American hero in a new German serial. Back in the 60?s and 70?s, though, West Germany was generally very positive about Americans (One German fellow pursued my mom for over a year with no success, poor guy) and American heroes were more prevalent in German pulps.

Larry is introduced to us as an FBI agent on vacation in France, but he never gets to enjoy the quiet charms of the Maurs district. Rumors are flying about giant bats attacking the local populace, strangely singling out those possessing blood type A. Shortly after arriving Brent discovers the corpse of one of their victims, a man whose self-destructing ring identifies him as the agent of a secret organization. His curiosity piqued, Brent investigates the horrific experiments of Dr. Canol and ultimately pursues the case to the forbidding manse of Egyptologist Dr. Bonnard. Are vampires plying their unholy trade in France, or is something even more bizarre at work?

Originally published in 1968, Das Grauen has its share of dated spy novel trappings. When else but the sixties could you get away with codenames like X-RAY-18? Nostalgia is definitely a selling point of this new audiobook series, which was made with long-time fans in mind. Europa produced 15 much-loved, bloody but very campy Larry Brent audio dramas back in the 1980s and has re-released them on CD as part of its ?R?ckkehr der Klassiker? (?Return of the Classic Writers?) line. Rainer Schmitt, the reader of this audio book, played hero Larry Brent in those productions.

Although Europa?s 1980?s audio dramas anticipated and inspired much of the contemporary work coming out of Germany, Europa itself hasn?t aged well as a producer of adult audio drama. (They still publish the popular children’s?series Die Drei ??? / The Three Investigators.)? Europa attempted to get into the newly rejuvenated adult audio drama market with two new Macabros recordings, but these were poorly produced by modern standards and weren?t well received. Wisely they?ve opted for the cheaper, less creatively demanding option of releasing Larry Brent as a series of audio books, and contracted production out to Lausch, one of Germany?s hottest young audio drama companies.

So how does it sound?

Rainer Schmitt ? considered THE voice of Larry Brent by German fans due to his audio drama portrayals of the hero back in the 80s – turns out to be a superlative reader. He breathes vibrant life into Shocker?s stock characters, giving the stolid French police chief grumbling presence and the morally conflicted Dr. Canol a delightfully anemic rasp. Schmitt has that rare ability to make you forget you?re listening to one man rather than a cast, and his versatility and verve makes this production compelling from start to finish. For this reviewer, Schmitt has become a name to watch out for.

Some German commentators have complained about Schmitt?s pacing, which is relentlessly fast. A more relaxed tempo wouldn?t hurt; it sometimes seems as though Schmitt is racing through Shocker?s text to squeeze it onto 3 CDs. But while Schmitt?s?rapidfire delivery?would have ruined Wuthering Heights, it?gives this pulp?adventure story a fitting rush of adrenaline.

The choice of music is interesting: Lausch opted to create a soundscape that evokes the 60?s / 70?s trappings of the original Brent novels. The music sounds like a basement Jazz combo, with a drum, piano, and some strumming violins added for Gothic tension. It?s a different approach than WortArt took with its modern, cinematic production of Jason Dark?s John Sinclair audiobook, Die R?ckkehr des Schwarzen Tod (Return of the Black Death). The music, like the story, is never really scary, but its exaggerated menace fits the material. Synthesized high-pitched bleats work particularly well in evoking the cries of giant bats and the pain of their piercing bites. The introductory / closing theme with its over-the-top maniacal laughter is, well . . . very, very German. I?ll leave it at that.

It is disappointing that Lausch has opted to use the same music tracks for both of their initial Larry Brent audio book releases instead of giving each its own soundtrack and individual feel. But I suppose this is a cost-cutting measure, and 14,95 Euros for 3 CDs is a tough price to beat.

There are few sound effects in the production outside of a well-placed thunderclap.

As supernatural detective stories go, I found this one surprisingly inventive. The plot doesn?t proceed in the direction you?d expect, and the characters, while 2-dimensional, all entertain. This is an origin story, and thus there are two interweaving plots ? the evil goings-on and the story of Brent?s first encounter with and adoption into the PSA, a paranormal investigative branch of the FBI. Shocker lays out some of the serial?s principle players such as the shadowy, blind director of the PSA and his gangly assistant, Bony. Brent himself is a likeable enough square-jawed type, although his introduction suffers from the principle ill plaguing German pulp-horror: a Deus-ex-Machina resolution. This is, in fact, the most literal Deus-ex-Machina ending I?ve ever heard. In a series named for its hero, you might expect Brent to resolve the situation through the application of his singular skills and intelligence. Not this time.

But if you want clever resolutions you should probably stick to straight mysteries. Occult detective stories, like horror tales, thrive more on generating a haunting atmosphere than ratiocinative logic. In this Larry Brent succeeds, after a fashion. You?re unlikely to be frightened, but as with a classic black-and-white horror film, you?ll likely fall under the spell of its outdated Gothic charm anyway. I don?t know if Bela Lugosi?s Dracula really scares people anymore, but he?s still a captivating presence onscreen.

All in all, ?Larry Brent? is a nice addition to an audio drama field crowded with occult detectives. Das Grauen schleicht durch Bonnards Haus is a welcome reminder that as good as audio drama adaptations can be, an author?s original, unedited text has a charm all its own.

Next Week: Malleus takes an exacting look at Highbridge audio?s Star Wars universe spin-off, Crimson Empire (English). Is the force with this audio drama?s charismatic anti-hero, or does his story choke on the stale ideas of an outworn franchise?