Is Stephen King the Garrison Keillor of horror? 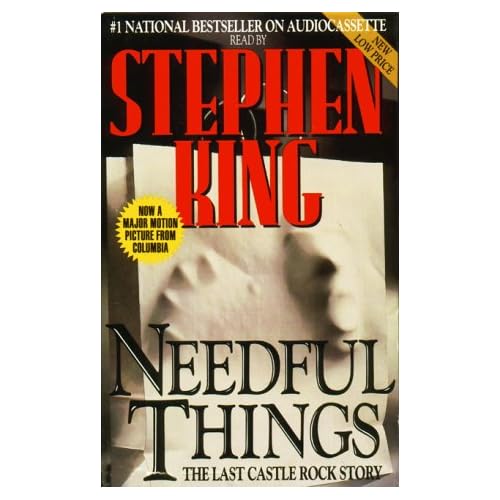 Head to Head: King vs. KeillorWere they separated at birth? Was Keillor put up for adoption in Minnesota and King sent to live with relatives in Maine? Or are they inverse doppelgangers from mirror universes? (Notice the spooky way they part their hair on opposite sides.)All joking aside, King and Keillor have one significant difference. Yes, just one. I’m reminded of a couplet by the German pop band Erste Allgemeine Verunsicherung:Ich bin eine Mischung, die ist ziemlich lecker, aus Albert Einstein und Arnold Schwarzenegger.? So weit, so gut, doch das Dumme ist nur – ich hab’ Schwarzeneggers Hirn und von Einstein die Figur. I’m a very tasty mix of Albert Einstein and Arnold Schwarzenegger. So far so good, but the stupid thing is – I have Schwarzenegger’s brain and Einstein’s body.

King has Keillor’s broad, squashed face, but he doesn’t have the pleasant baritone Voice that rumbles out of it. Keillor has made a career of out of sounding nothing like he looks: King sounds just the way he looks. King’s thin, geeky voice is almost a whine.

Folksy, regional, populist attraction to “the common man” in their work. Neither one knows how to dress. Castle Rock and Lake Wobegon.
Phenomena of authors reading their own work. Geibel?s complaint that they aren?t any good. Suggestion of intimacy?? Historical value?? Presumed access to true meaning of the text in the writer?s inflections?? Lots of professional actors have read King ? so what is the virtue of King himself reading?? No actor will ever have as intimate a connection with a text as the man or woman who wrote it, but not every author is a good reader. King is a great storyteller.

Book published in 1991. Music dates it to that period. King’s novels have always incorporated a heap of brand names to be contemporary – these will someday render them of the past.

King – a raconteur. His stories are made to be read.

Do you want a big town actor playing at a small town voice, or a genuinely small town author?

The small town politeness. Leland Gaunt, the polite villain – started with Dracula?? He has NO motivation (well, amusement. He’s lived a long time and is bored.)?- his character is merely a veneer of polite salesmanship over evil. Why King’s villains resonate?- our lives are at the whim of abstract forces that may seem to have an independent malevolent spirit – the market, corporations, inflation, recession. For many of us these things are more real than the close, neighborly relationships depicted in King’s novel.

King villains are barely characters. They are malevolent?forces in human form.

Horror novels thrive on small towns. Not because they represent perfect close-knit communities waiting to be ripped apart, but because they represent communities that are close enough to be dysfunctional on a personal level. Through horror novels like Needful Things neighbors know each other well enough to inspire real love and hate. The anonymous horrors of city – or, increasingly, of present-day small town life in America (disconnected / internet / mail order / strip mall) – don’t seem quite as extraordinary. We approach these small towns with nostalgic yearning and trepidation.

The Great American Novel. of Greed.

“Perhaps all the really special things I sell aren’t what they appear to be. Perhaps they are actually gray things with only one remarkable property – the ability to take the shapes of those things which haunt the dreams of men and women.”? He paused, then added thoughtfully:? “Perhaps they are dreams themselves.”

“In the movies you get a lot of pining and precious little grief. Because grief is too real. Grief is . . . “? He let go of her arms, slowly picked up a dish and began to wipe it dry. “Grief is brutal.”

But doesn?t writer?s spirit and personality often infuse tone of voice as well as text?? Consider the wide-eyed, innocent wonder that comes through Ray Bradbury?s wonderfully boyish reading of The Martian Chronicles.

The eyes have it. Stephen King?s odd and unpretentious voice, like his odd and unpretentious stories, is weirdly compelling. To put it in terms of one of King?s favorite phrases, repeated in countless novels and stories, both his squashed, Cheshire-cat face and his thin, unimposing voice look / feel wrong for the ?King of Horror?. Many of King?s jeans and t-shirt photos, his love of rock and roll, his heavily colloquial writing style all scream ?hey, I?m a normal guy!?? but the blank intensity of those small eyes in his too-broad face mean we?ll never believe him. To paraphrase another of King?s favorite lines, they seize hold of the imagination by dint of dogged persistence and force of personality and ?rewrite the script?. ?This isn?t in the script? ? some guy wandered in from the street and ambled up to the podium while the author was indisposed in the bathroom. A guy who, by the looks of him, really doesn?t belong anywhere. And just that quality has made King belong everywhere.

Knows his Maine accent and regional personalities. In the manner of Lovecraft (who continues to influence his writing to this day ? see Duma Key), a horror writer with strong local roots in the most haunted region of the country, New England.

Leland Gaunt ? King?s best villains compelling, Gaunt?s early and strong presence in the story puts King?s effective villainy front and center.? King’s villains are all the same. Old, manipulative, know things they shouldn’t about people’s private darkness, reflect a pessimistic view that at base humans are vile, corrupted creatures. For Lovecraft, mankind was better off not knowing about the true forces of the universe, which were align, malign, and indifferent to man. For King, for whom Lovecraft has been a major inspiration (in this book “Yog-Sothoth Rules”, “Plains of Leng”) the horror is that mankind may be better off not knowing about or acknowledging his own true nature:? Venal, selfish, grasping.

Any chance that Gaunt is meant to be a Man of Leng?

Introduction ? a local gabber fills you in on the simmering relationships and half-truths of small town life. Characters are cartoonish exaggerations, but they ring true regardless since many American small-town personalities ARE cartoonish.