Hollywood has decreed that summertime is superhero time, so today we don our spandex and take to the skies with this historical release. Superman may not pack the same box office punch he once did, but this super-delicious old time radio serial still packs plenty of P-E-P: Pep! With its clean bubble-gum flavor and cartoon verve, “Superman vs. Atom Man” leaves this comic book afficionado asking “why weren’t more OTR superhero shows this much fun?” 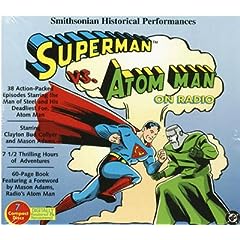 Also includes a surprisingly entertaining and well-written booklet by Anthony Tollins, with a foreword by “Atom Man” actor Mason Adams. Adams is a firecracker in that old-time old boy’s way, quoting from Xaviera Hollander’s Happy Hooker and writing just as he acted: with lots of exclamation points!

Availability: Radio Spirits no longer publish this colorfully packaged classic, a shame since it’s one of the best things they ever released. It’s harder (but far from impossible) to find on CD than it should be, but easy to get on audio cassette secondhand. Try amazon or ebay sellers.

Those of us who didn’t grow up during the 1940’s often imagine our parents or grandparents grew up in a black-and-white entertainment vacuum. Sure the world was more open and unspoiled, sure California was a genuine paradise, sure you could visit Yosemite at the right time of year and have the park all to yourself, but what about passive entertainment? Where were T.V., color movies, video games – all the readymade flights of fancy that we take for granted today? Dana Carvey built his whole “Grumpy Old Man” skit on Saturday Night Live around this perception. He’d stubbornly bark that since kids “didn’t have no talking movies” in his day, there was nothing to do for fun except throw yourself off a cliff, and when you landed your spine would shoot through your skull. “And we liked it!”

Carvey’s caricature aside, for the 1940’s child who craved escape from the everyday, an entertaining suicide was not the only option. Aside from a wilder, more beautiful country to create their own adventures in, kids had radio back then, and at its best Old Time radio could be pretty magical. “Superman vs. Atom Man”, an extended story arc from the ongoing Superman radio serial starring Clayton Collyer, was one of the highlights, and even in our media-saturated present there’s still plenty of charm and thrills to be had from this post-WWII confection.

The title alone tells you that “Superman vs. the Atom Man” had something over countless other Old Time Radio superhero shows: a worthy opponent. Television shows have often avoided the colorful supervillains of the comics in favor of vanilla gangster types simply because they were less expensive antagonists. A supervillain might require extensive special effects like laser-beam eyes, after all, but a gangster only needed a suit and a gun. But the problem with gangsters is that they make really dull opponents for superheroes. Bullets bounce off Superman’s chest, for goodness’ sake! So why did old time superhero radio shows, which didn’t have the budgetary effects limitations of television, also stick to gangsters? In today’s exciting story, Superman stops a bank robbery by punching some criminals who are 1000 times weaker than he is! Yawn.

Meanwhile on the comic book side, there have been plenty – far too many, actually – of villains that somehow use kryptonite to take on the Man of Steel. Metallo, a semi-tragic cyborg with a Kryptonite heart, is one of the most interesting. But the old time radio writers of “Superman vs. Atom Man” didn’t make use of Superman’s comic book rogues gallery, creating their own kryptonite man instead from a former member of the Hitler Youth. After eluding the triumphant Allied forces, the mad Nazi scientist known as Der Teufel creates the “Atom Man” in a hidden bunker in Germany by injecting liquid kryptonite into young Heinrich Milch. Outfitted with some campy sci-fi gear, Milch could then flip a switch and ionize the kryptonite, sending lethal radioactive beams through his metal-gloved hands. Mason Adams plays Heinrich Milch with straightforward but infectious zeal. Taking the name “Henry Miller”, the Atom Man poses as a war veteran to infiltrate the Daily Planet, slyly befriending Superman in his alter-ego of reporter Clark Kent. Suspecting Kent’s true identity, Miller kidnaps Jimmy Olsen and lures Superman to a secluded beach. His intent? To murder the Man of Steel and then create a campaign of terror against America.

These days Nazis have been done to death as pulp villains, but back in 1945 they still had relevance and credibility. Of course, even then they were being presented as silly caricatures. So the mad Nazi scientist who engineers the Atom Man calls himself “Der Teufel” (“The Devil”). But what really kills me is the name they chose for the Atom Man: Heinrich Milch. So you have a mad German scientist who calls himself “the Devil”, and you can’t come up with a more menacing name for his evil creation than “Henry Milk?” Why not throw in his sinister sidekick “Johann Plaetzchen” (John Cookies)?

Clayton Collyer’s Superman is appropriately diffident as Kent and steely-jawed as the hero, but his moments of desperation and weakness are the most riveting. Many Old Time Radio Superman shows suffered from never placing the hero in any real danger, but here he hovers on the brink of paranoia and death. The supporting cast of regulars plays well to (stereo)type, including the ever-annoying Jimmy Olsen (Jackie Kelk, who originated the radio role that later moved into the comic books) and blustering Newspaper publisher Perry White (Julian Noa). Lois Lane (Joan Alexander) fans will be disappointed, as the character is barely present and there is no romance to speak of. I was pleased. Superman, for better or worse, is categorically a little boy’s fantasy, and little boys think girls and romance are icky.

But the stars of “Superman vs. Atom Man” are really the villains. When he finally confronts Superman in his Atom Man persona Mason Adams’ voice takes on a metallic distortion as he raves in the grand old bad-guy manner. “DIE, SUPERMAN, DIE!!” Kind of like a pre-Marvel Doctor Doom, actually, without the aristocratic touch. (With his green robes and metal mask, his picture on the CD box cover even looks like Doctor Doom, although this costume actually comes from the movie serial version of the story and wasn’t featured in the audio drama. The film version ditched the Nazi angle and recast perennial Superman villain Lex Luthor as the Atom Man.)

If you like your villains subtle then Adams’ over-the-top homicidal fits won’t appeal to you, but if you can enjoy a classic villain played to the hilt, the way Adams throws himself into the role is still great fun to hear. As straightforward as the Superman / Atom Man rivalry is, unlike the overhyped and frankly stupid 1992 “Death of Superman” comic book story (itself made into Dirk Maggs’ 1994 Superman audio drama “Superman – Doomsday and Beyond / Superman Lives!” by the BBC), “Superman vs. Atom Man” gives us more than a grudge match between two bruisers. There are a variety of colorful villains scheming to make use of Miller’s abilities and the power vacuum he creates after burying Superman alive. Aside from Der Teufel, the kryptonite-purveying Scarlet Widow (Elspeth Eric) and the crimelord Sidney (Ned Wever delivering an open tribute to classic film actor Sidney Greenstreet) keep the drama entertaining with their machinations and internecine power struggles. Sidney in particular is enjoyably decadent and twisted, gleefully setting in motion a plot to kill Superman that is surprisingly sadistic. Meanwhile, after being continually manipulated by his elders in crime, Atom Man Henry Miller plots to murder them all with Oedipal fervor.

And murder he does. Those who look back on the 1940’s as a “more innocent time” in the media may be surprised that the Atom Man actually kills some of his rivals in cold blood. Naturally, only fellow evil-doers fall, but this still came as a surprise to me. I myself grew up on the 1970’s superfriends cartoon where heroes and villains weren’t even allowed to hit each other, much less kill anyone. Who would have thought children’s media was less violent in the 70’s than the 40’s?

Those who think advertising was more restrained in the 40’s are in for another surprise. Announcer Dan McCullough’s endless pitches for Kellogg’s Pep cereal have been retained in their entirety, and they take up a sizable portion of each brief episode. There is a certain innocence to McCullough’s open, unsophisticated, and utterly relentless hawking, and some amusement to be had hearing the endless ways he comes up with to get kids excited about the comic book buttons Kellogg’s was putting in their cereals. Also interesting is how few of the popular characters featured on the buttons have lasted to the present day. Moon Mullins, anyone? But after listening to 38 episodes worth of these historical advertisements you will probably find yourself wishing that the Smithsonian team had just edited them out.

Unlike most Radio Spirits releases, “Superman vs. Atom Man on Radio” has been digitally remastered. As a result, this Old Time Radio broadcast sounds remarkably clean for its age. I’m not sure if other versions of the broadcast are available – sometimes OTR can be found free on the net – but in this case you will definitely want the remastered version.

“Superman vs. Atom Man” is not for everyone. If you don’t appreciate camp or are just above juvenile entertainments, by all means steer clear. Sophisticated material this isn’t. But taken for what it is, this is accomplished serial entertainment that is enthusiastically performed and smartly done. In short, “Superman vs. Atom Man” packs considerable nostalgic charm and genuine entertainment for old and new-time listeners alike. If you’ve never dipped your toe into Old Time Radio superhero serials and are curious, this is an excellent place to start. It’s also an excellent place to stop, because they don’t get any better than this.

Malleus resumes its regular schedule – for real, this time – with a special post looking at three ballads that blend spoken word storytelling with song. Tune in to read about the maritime wonder of Gordon Bok’s “Peter Kagan and the Wind”, the biting southern satire of Julius Lester’s “Stagolee”, and to download the Tuft’s Beelzebub’s original recording of the long lost a cappella classic, “Major Tom / Space Oddity”!