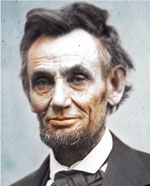 Our friends at Quicksilver Radio Theater are bringing back their docudrama, Good Friday, 1865, Licoln’s Last Day to the stage. As I’ve said before, this is a great play, and if you’re anywhere near NYC, you should make an effort to check it out!

In this audio docudrama (recipient of the National Audio Theatre’s “Best Script” award), the character of a country, and its President, are revealed — as a traumatic war winds down, and eerie events presage Abraham Lincoln’s own end…

Live on stage with a full cast, live sound effects, and original music composed by Tony-Award winner MARK HOLLMANN, and performed by members of the New York Repertory Orchestra.

Quicksilver Radio Theater, founded by actor CRAIG WICHMAN in 1995, is a group of seasoned New York performing artists that has taken the National Federation of Community Broadcasters’ “Gold Reel” award, and is nationally syndicated by the Public Radio Exchange. This production is directed by JAY STERN, and the cast includes BERNADETTE FIORELLA, RAMONA FLOYD, JOSEPH FRANCHINI, DEREK LIVELY, JOHN PRAVE, and MICKEY RYAN.

New York Repertory Orchestra, founded by DAVID LEIBOWITZ in 1991, is New York’s leading community-based, all-volunteer orchestra and is made up of talented professional and amateur musicians who present a series of free concerts each season.

Can’t make it to NYC? Check out Lincoln’s Last Day when it last appeared on RDR.