The inaugural column of Malleus kicks off a three part investigation of the seminal role of supernatural horror in the contemporary German audio drama explosion. Discover the first German radio drama, learn about German pulp novels, and experience the terror of Konga the Man-Frog.

As I said in the Malleus podcast interview here on Radio Drama Revival, I originally intended to write a 3-part discussion of the entire H?rspiel-Boom. At that time I actually thought doing an overview would be pretty straightforward. Ha! As passionately as I?ve followed the significant supernatural horror element of the Boom, there are many prominent genres I haven?t pursued. These include westerns, children?s serials, straight krimis (mysteries), and science fiction, among others, all of which have a significant history in German audio drama. So rather than pretend to cover everything I?ve decided to focus on what I know well: supernatural horror h?rspiele from 1999 to the present day. This article is NOT a comprehensive overview of the history of German h?rspiel, or even of the recent H?rspiel-Boom. Instead, my intent is to give non-German speakers a context for the many supernaturally oriented h?rspiele that will be featured in upcoming Malleus reviews.

All that said, I do believe and will argue that the Grusel-Krimi (“spine-tingling crime”) genre has inspired and defined the post-1999 Boom more than any other. After all, it wasn?t Benjamin Bl?mchen: Edition 2000 that kick-started the explosion at the turn of the millennium. So while I admit my preference for horror serials, there are historical reasons to privilege them that go beyond personal taste.

Without further ado, the essay I like to call:

Americans are used to hearing about audio drama?s inevitable decline. News programs and music drive radio drama off the air and audio books crowd audio drama off store shelves. By and large the BBC and a few older auteurs who produce a small amount of work on an irregular basis define the professional field that remains. (Yuri Rasovsky, Tom Lopez, Phil Proctor, etc.). Audio drama is a constant fight against the odds for most if not all of these producers, one that gets harder all the time as public funding evaporates and audiences shrink. This reality is so deeply ingrained in us that it?s hard to imagine things might be different elsewhere. But they are. In 2002 Yuri Rasovsky stated, “In certain areas of the world where TV is difficult, because of terrain, such as mountainous countries like Greece or the Balkans, radio drama is still a going concern. The best I’ve heard of any in the world is Serbo-Croatian. They make the BBC look like amateurs.” (see http://www.audiotheater.com/yuri.html)

Rasovsky isn?t under any illusions that American producers can emulate the success of radio drama in Greece, the Balkans, or even the U.K.. Given the current state of public radio and the ubiquity of television, its highly unlikely we?re going to see a renaissance of public radio drama in the U.S.A. any time soon. But what might be learned from a successful foreign model driven entirely by the private sector? T.V. is as much a fixture in Germany as it is here. But audio drama has been thriving more than ever in Germany as a commercial enterprise for almost ten years. And although science fiction enjoys a healthy share of the market in Germany, it doesn?t lead the field there as it does in the USA. Since 1999, and arguably much earlier in the 1980?s, that role has belonged to the Grusel-Krimi, or supernatural detective serial. (The term “Grusel-Krimi” is heavily associated with the series Larry Brent, which was first published in Silber-Grusel-Krimis. A more neutral term for the entire genre would be Grusel. I?ve decided to go with Grusel-Krimi anyway because it emphasizes both the mystery/detective/adventure and fantastical/horror elements that the leading German audio serials have embraced.) Here I?ll sketch a brief history of the Grusel-Krimi genre and consider the powerful role they play in the commercial H?rspiel-Boom today. I hope this will be of interest, and possibly of use, to English speaking audio dramatists and their fans.

Germany has a long history of audio drama. The first, Hans Flesch?s Zauberei auf dem Sender (Sorcery on the Radio), aired on October 24, 1924, just two years after the first radio sketch, “A Rural Line on Education,” was broadcast in the U.S. on Pittsburgh?s KDKA station. You can download a modern remake of Zauberei for free here: http://www.mediaculture online.de/fileadmin/mp3s/zauberei_sender.mp3. Among other things, this radio drama contains the most quintessentially German statement you?ll ever hear: “Aber letzten Endes wollen wir die Ordnung und Sie die Unordnung, und sicher ist die Ordnung das Richtige und die Unordnung das Falsche.” (But finally, we want Order and you want Disorder, and certainly Order is right and Disorder is wrong.) The villain of the piece, a chaotic sorcerer who torments an anal retentive radio broadcaster, might be viewed as a prophetic antecedent of the heavy supernatural bent in contemporary German audio drama.

But Germany?s current wave doesn?t descend directly from the public radio legacy of Zauberei, and for the most part it isn?t being broadcast. Rather, the CD-based H?rspiel-Boom traces its commercial roots to the audiocassette and LP adventures that German studios like Europa and Tonstudio Braun released in the 1970?s and 1980?s. Europa, Tonstudio Braun, and other companies published many genres, but one proved particularly influential: horror.

But what kind of horror? Traditional “Universal Monsters”-style horror had a prominent place in the 80?s pantheon of German audio drama. German authors like H.G. Francis (Hans Gerhard Franciskowsky) produced self-contained audio plays about classic monsters like Dracula, Frankenstein, and werewolves through Europa. Dramas of this kind are still being produced today: Dreamland Productions is recording modern takes on the H.G. Francis stories, and Titania-Medien?s Gruselkabinett line is doing outstanding adaptations of horror classics like Dracula and Carmilla. But it was really the occult detective serial, or Grusel-Krimi, from the 80?s scene that shaped the modern h?rspiel landscape more than anything else.

The occult detective serial? Grusel-Krimis? What the fahrvergn?gen are you talking about? 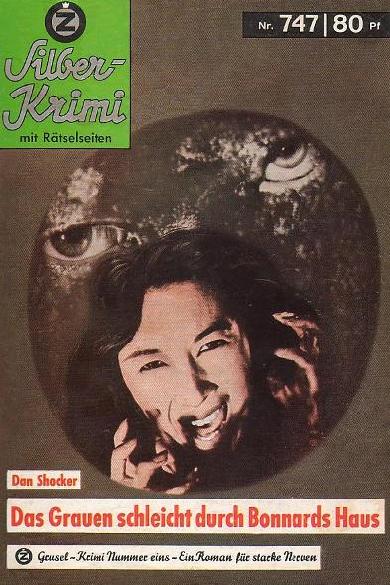 Former chemist Jason Dark (Helmut Rellergerd) published his first Geisterj?ger John Sinclair story, Die Nacht des Hexers (Night of the Warlock), in 1973. He has since written well over 2,000 John Sinclair adventures, and is still cranking out new ones to this day. Ernst Vlcek?s and Neal Davenport?s (Kurt Luif) highly regarded D?monenkiller (Demon killer) serial likewise began in 1973. (Having read examples of all three, I can confirm that despite it?s name D?monenkiller is subtler and less formulaic than the others.) Although D?monenkiller concluded in 1977, the Zaubermond publishing house recently began publishing new adventures. (A new D?monenkiller audio drama series, not surprisingly, is in preparation.) The pulps (groschenromane, roughly equivalent to “dime novels”) die hard in Germany; nowadays those that do often return from the grave for a second commercial life.

All three of the serials mentioned above along with many others became the basis for Tonstudio Braun and Europa audio dramas in the 1980s. The German pulps already had a sizable fanbase that quickly gravitated to the dramatizations, and they became popular with children new to the source material as well. I?ve sampled some Tonstudio Braun Geisterj?ger John Sinclair adventures and Europa serials like Macabros and Larry Brent; to my ear they were probably well produced for their time, but today show their age and are more humorous than frightening. For pure camp, though, it?s hard to beat titles like Konga, Der Menschenfrosch (Konga the Man-Frog, from Dan Shocker?s Macabros serial.) 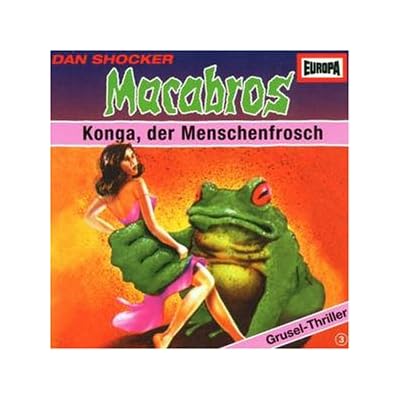 These and other single-cassette serial adventures made a strong impression on young listeners, and between the 80?s and the year 2000 many of their fans grew up. Some of those fans grew up to be talented producers whose work would far outshine the material that thrilled them as children.

Many date this revival as the beginning of the contemporary H?rspiel-Boom; D?ring himself traces the Boom?s start to the 1980?s cassettes that inspired him. Regardless of where you place the Boom’s beginning, most would agree that the Tonstudio Braun / Europa era had diminished by 1999, and that WortArt was initiating a new phase. The Edition 2000 Sinclair adventures, much better produced and acted than their 80?s predecessors (although Tonstudio Braun loyalists will hate me for saying that), met with considerable financial success. Germans weaned on the 80?s cassettes had gone on to get jobs and make money, and they were happy to spend it on this nostalgic comeback. John Sinclair: Der Anfang (John Sinclair: The Beginning) sold so well that it made Germany?s music charts in 2002, an unprecedented feat for an audio drama. Can you imagine, say, ZBS’ Ruby making the top 40 in the U.S.A.?

After Sinclair opened the way, other new audio dramas and revivals followed. Not all of them were occult detective serials, of course, but many of the flagship titles were. Today many of the big h?rspiel companies have at least one supernatural investigator in their stable, and more are on the way. Even brand new properties like the pseudo-historical Schwarze Sonne set in the 19th century and modern thrillers like Schattenreich and Gabriel Burns are essentially updates of the occult detective legacy. It?s gotten to the point that Oliver D?ring now worries publicly about over-saturation of the niche he revived with Sinclair. But while a culling is probably inevitable, it hasn?t happened yet. Rather than topping out, the h?rspiel market has been steadily growing and diversifying since 1999, with new companies bringing more science fiction, fantasy, mystery, children?s, and thriller releases to the scene. Even D?ring himself, rather than cutting back, has chosen to roll the dice and begin another supernatural investigator series (the adult-oriented Don Harris: Psycho–Cop). When the market does reach its tipping point, I don?t anticipate a major crash but a gradual process of weeding out weaker material. H?rspiel looks to remain a vital pop subculture in Germany for some time to come.

Will Grusel-Krimis retain their preeminent place within the adult audio drama market? I?m inclined to say no, but despite steady diversification there are still more Grusel-Krimis published than any other genre, and their number is only increasing. Even if they lose their leading position, they will probably always constitute a significant portion of contemporary German audio drama. Certainly there are no signs that science fiction will take the crown from supernatural horror serials, so in this respect German and USA markets are likely to remain distinct.

For further information about the Grusel genre check out the following links:

(Scroll down for a frank and not entirely flattering discussion of German horror pulps.)

(The most thorough account you?ll find on the net about the history of Grusel Heftromans from 1968 until the present day. The entire site is a treasure trove of information for those interested in the genre.)

Tune in next week for a look at common characteristics of Grusel-Krimi audio dramas and an answer to the strange question: “Why do adult German audio serials rarely feature German heroes?”