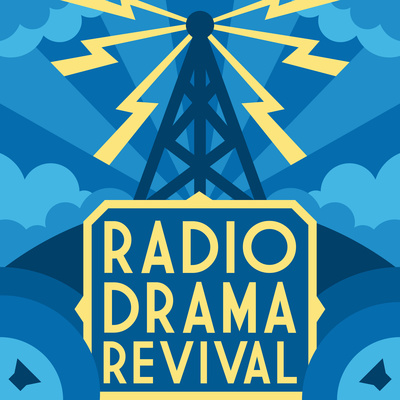 Radio Drama Revival is one of the internet’s longest running anthology audio drama shows, with the goal of showcasing the diversity and vitality of modern audio fiction.

Radio Drama Revival was founded in 2007 by executive producer and host emeritus Fred Greenhalgh. The show transitioned to the stewardship of David Rheinstrom in 2016, and in 2020 the mantle of host was passed down to Elena Fernández Collins.

To date, Radio Drama Revival has featured hundreds of hours of audio stories, interviews, and other special features. The hosts have interviewed creators and artists ranging in age from 17 to 70 and have showcased some of the stand out hits of the contemporary audio drama scene.

Elena Fernández Collins (they/them) is a podcast critic and forensic sociolinguist living in Portland, OR. They write about podcasts for their own website, The Bello Collective, Discover Pods, and curate their own newsletter, Audio Dramatic. You can find them spending too much time on Twitter @ShoMarq, where they would probably like to to talk to you about having a press kit and transcripts for your podcast.

Radio Drama Revival’s history starts with Fred Greenhalgh (he/him), who kicked the show off in January of 2007.

Fred’s passion for radio drama started with his discovery of the art while producing his first work, Day of the Dead. A dedicated fiction writer through high school and college, Fred found the audio format an ideal medium for his short stories and began the process of adapting the tales he’d collected over the years under the moniker of FinalRune Productions (now Dagaz Media).

Fred realized quickly there was a paucity of places to hear radio drama, so when a free air slot opened up at Portland, Maine community radio station WMPG, Fred sprung at the chance. Station management was up for a radio drama show and kerplam! Radio Drama Revival was born. It has been available since Day 1 in podcast format, and since ~2014 has been online-only.

Fred is ASTOUNDED, DELIGHTED, THRILLED, and other ebullient adjectives as the terrific growth in audio drama / audio fiction over the last ~15 years. His passion is sharing this amazing art form with everyone with ears.

David Rheinstrom (he/him) is a writer, producer, and sometimes voice-actor living in Washington, D.C., but originally hailing from the suburbs of Chicago. He first got into radio theater in 2007, when he and two friends produced three original shows – Sky Pirates!, The Human Chord, and Simon Colt – with the KWUR Theater of the Air, their college radio theater company.

From 2016-17, David was the host of Wondery’s Secrets, Crimes, and Audiotape, an audio fiction anthology series.

For his day job, David is a professional (descriptivist!) grammarian at Khan Academy, an education nonprofit in the San Francisco Bay area. Prior to coming on board with Radio Drama Revival, David was assistant sound editor, writer, and producer with Chicago’s post-apocalyptic scifi podcast Our Fair City.

Wil Williams (they/them) is a podcast critic and devout millennial living in Phoenix, Arizona, a place too hot and dry for any human to live, so perhaps Wil Williams is actually several lizards in a trench coat. Wil is the CEO and co-founder of Hug House Productions, where they serve as the showrunner of VALENCE and Scoring Magic and a co-host of How to Act Fereldan, They are one of the hosts of the Tuned In, Dialed Up and Empty The Queues podcasts. You can find Wil’s podcast reviews on their own website, Polygon, The AV Club’s Podmass, Spotify for Podcasters, and Discover Pods, for which Wil is also the Managing Editor.

Rashika Rao (she/her) is a writer and space scientist who spends her free time picnicking her way through the great Midwestern unknown.
In the audio drama world, she co-produces the anthology Insula, set to premiere later this year, and makes occasional vigilante transcripts for shows that need them.
She also gives a mean constellation tour (Northern Hemisphere only.)

Heather Cohen (she/her) is a researcher, data nerd, and, that rarest of things, an LA native. She first got involved in RDR after host and longtime friend, David Rheinstrom, reminded her that she had agreed to do research on his creative projects at age 15; Luckily, they have both improved in their respective skillsets since then. When not giving directions to sunburnt tourists, teaching her cats to fetch, or shouting about the anachronism of having those cuffs in that era, she works at a biotech and research company.

Anne Baird (they/them) is a certified mathematics nerd and business enthusiast, spending their days managing operations for a real estate investment company at their home on the Jersey Shore and their evenings frolicking in a field of horses. As one of the co-founders of Hug House Productions, Anne is a co-host on Scoring Magic, the producer of VALENCE, and showrunner for How to Act Fereldan. They are also a podcast account manager for Tink Media.

Katie (she/her) is tired all the time, but has not let that stop her yet. She is currently based in Maryland, where she spends her days writing for engineers and her nights listening to podcasts, moving her cat off of the keyboard, and writing things that are meant to make others cry, but end up making her cry too. Katie is one of the founders of Hug House Productions and a co-host on Scoring Magic, lead director and writer for VALENCE, and the showrunner for HEXADEC. You can find her on Twitter, or somewhere in standstill traffic on I-495 screaming into an uncaring universe.

Sean Howard (he/him) is a recovering juggler, and has dabbled in theatre as both a performer and a lighting designer.

He began as a line producer on Season 1 of Alba Salix, responsible for managing the cast, setting schedules and coordinating budgets, as well as fundraising, photography and marketing.

Along with his partner Eli Hamada McIlveen, Sean is the co-founder of Fable and Folly, the producer and co‐director of Alba Salix, Royal Physician and The Axe & Crown, and the Game Master of The End of Time and Other Bothers.

He also brings his 20+ years of marketing and advertising experience to Alba Salix. He is relatively new to the audio world, but is a podcast addict of the highest order.

Eli Hamada McIlveen (he/him) is a writer, sound designer and musician based in Hamilton, Ontario.

He’s been recording strange noises since he first “borrowed” his dad’s cassette player as a kid. He spent five years at CKMS-FM in Waterloo as producer and on-air host, and was later sound designer for a raft of theatre productions in Toronto.

Along with his partner Sean Howard, he is the co-founder of Fable and Folly, producers of Alba Salix, Royal Physician and Civilized. He’s also provided sound design and dialogue editing for other shows, including Unwell.