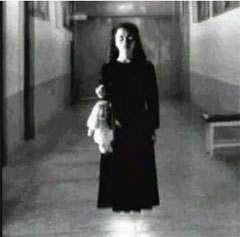 Just because we don’t feel that we get quite enough spooky programming during the month of October, we’re continuing our tradition of re-upping the spooky tales for the month of November. This week, it’s our esteemed friend Roger Gregg, who produced a spooky ghost number with the Gaiety School of Acting’s 2010 class (a Dublin, Ireland based advanced theatre training school).

The show is Scene from Horror Hotel: Episode 1, and by the end of it, you’ll start to wonder where all the other episodes went… The show is masterfully stylized, and not quite a satire of the modern ghost classics such as The Shining. Come on, every haunted hotel needs to have a bath tub, right? Stay tuned for a special secret track at the end…

Before we get into our main feature, Captain Radio is back with a review of Demon Eyes by John Ballentine’s Campfire Radio Theater.

Some notes from Roger on the production:

The scene features wonderful performances by Margaret McAuliffe and Genevieve Hulme-Beaman.
For location realism, Margaret got in her bathing suit and we filled the bath to record this scene.

The scene was recorded with a portable HD recorder and a Rode Stereo Microphone.

Draining the bath was recorded wild in situ. The other bath sounds were created naturally by the actors in the scene, rising from the bath and so forth. The scripts were taped to the walls of the bathroom to faciliate maximum free movement.