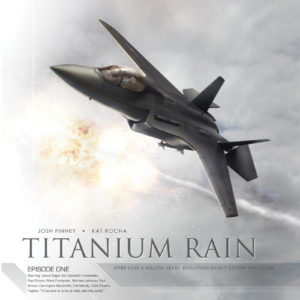 Following up with our interview with creator Josh Finney and actress Denise Poirier, we have this week the first half of Titanium Rain, the searing Audie-nominated, Mark Time-winning war story by the Audiocomics Company (created by Josh Finney and Kat Rocha).

AudioComics and Finney are teaming up again as they seek to produce Utopiates (Support it on Kickstarter!!!), a story about a special kind of drug that allows you to swap personalities with another person. It takes place in a grim cyberpunk world reminiscent of Bladerunner or the works of William Gibson.

Titanium Rain gives you a flavor of what this combo can produce – a war story of the 21st century. In 2031, mankind’s survival instinct is put to the test when a civil war in China spirals into global conflict. Nations are destroyed. Millions are killed. And for many, like US Air Force pilot Alec Killian, survival will mean shedding some of his humanity in exchange for biotech and machine. Is this the ultimate corruption of nature, or the birth pains of a new chapter in mankind’s evolution?

First 1/2 of the show, with the rest available for purchase at: http://audiocomicscompany.com/?page_id=42