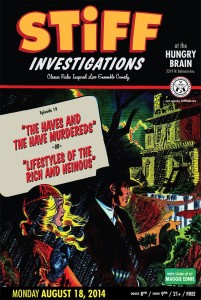 This week we have the delicious irreverant, lewd, scandalous and downright HILARIOUS antics of a detective who really puts the ‘hard’ in hard-boiled. Enter: Stiff Investigations, a live radio drama series which twists the OTR detective and makes it fresh for a new age.

In this episode, Jack and Venus visit the Vixen Family mansion for a party on the Devil’s Sabbath, and when a body is discovered, meeting Venus’ odd parents becomes the least of Jack’s problems. Recorded Live at the Hungry Brain August 18th, 2014

We also encourage YOU to submit for the Hear Now Festival and Mark Time Awards.  The world needs your awesome, fresh, new audio drama!!